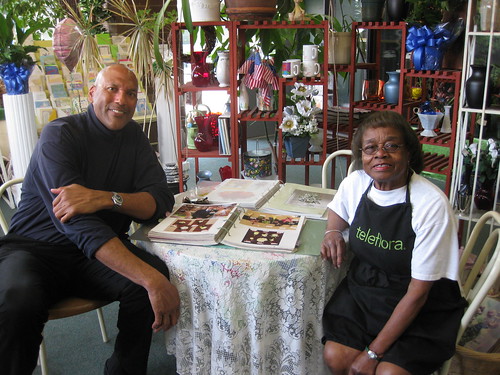 Type in James Donaldson into any search engine, and you’ll probably come across a young basketball player for the Seattle Supersonics with an Afro about as big as the ball he’s holding. Now, with a little less hair, and a lot more experience, Donaldson is challenging incumbent mayor Greg Nickels for the chance to run Seattle. On Monday of this week, Donaldson visited the Central District to meet business owners and discuss their concerns.

As a former owner of a health and physical therapy business at 22nd & Jackson, Donaldson said he is very familiar with the area and the struggles of small businesses in the city. His main suggestions for easing their burdens are to reduce business taxes and help speed up the permitting process. “I don’t think there needs to be a penalty for business to grow. We need to have incentives for business to grow,” he said, referring to head and square footage taxes the city levies on businesses. Donaldson wants to get rid of the taxes to ease the stress on small businesses that he says are most effected by them.

Mary Wesely, owner of Flowers Just 4U since 1984 and a supporter of Donaldson, is looking to him to tighten up the streets around the Central District. One of her major concerns are the large groups of young people that hang out on the streets near her business. She’d like to see a stronger police presence, including police patrolling on foot, and for the city to provide more options to keep kids involved in positive activities. “You’ve got to let the kids know that there’s other places they can go, other than hanging out on a street corner. It looks bad, it gives them a label, and they may be good innocent kids, but we don’t know.”

Donaldson addressed these concerns when asked about crime in the Central District and elsewhere around the city, calling for a larger police force and change in focus to have more walking, biking, and horseback-riding officers in neighborhoods. “We need to make sure that we get more police officers involved in our community than has been done in the last several years,”  he said. Donaldson would fund additional police resources by seeking other efficiencies and looking for ways to reduce the more expensive levels of management in the city bureaucracy. “There are over 13,000 city employees now. Around 800 of them make over one hundred thousand dollars per year. How much duplication and replication and triplication is going on?”

On the topic of development, Donaldson stressed the need to insure that the city can continue to grow and accommodate new residents. “We can’t keep on getting by with the way things have been,” Donaldson said. “We want to keep neighborhood charm and historical aspects, but we need to build for our growth.”

Editor’s note: This story was written by our awesome Neighborlogs news intern Lucas Anderson, based on audio recordings of an interview conducted by Scott

Note to other candidates: let us know when you’ll be in the neighborhood and we’ll be there to cover it