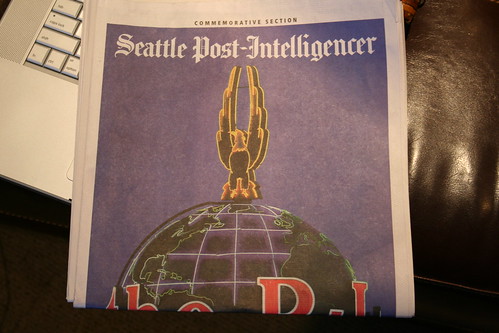 This morning I woke up unusually early after an unusually vivid dream about being in the PI newsroom on its last day as a city newspaper. In the dream a friend worked there and I was on hand to help box stuff up and preserve some memories on camera. In that odd way that dreams happen and in what might be considered an omen for other mass media, the main activity in the newsroom was not the mechanics of putting news to paper but instead was the production of a television newscast. Tears were shed, boxes were carried out, and I awoke and was unable to go back to sleep.

I used the opportunity to walk down to the AM/PM to pick up the last commemorative copy of the paper. We have always been Times subscribers here at HQ, so it was good luck that we were able to pick up a copy of the last PI edition before they had a chance to sell out.

It’s definitely a sad day. We’ve enjoyed a lot of great stories and amazing reporting from the PI.  And now suddenly there’s a whole lot fewer people who are funded to do that kind of work in this city. If rumors are to be believed, financial problems at the Seattle Times might leave us without a daily paper by the end of the year.

There has been a lucky coincidence for more than 100 years where the high cost and high barriers to entry of the printing world have provided a highly profitable business model for delivering news to people’s doorsteps. That model is now collapsing in large markets due to the combination of a weak economy, bad business management, a technological revolution in publishing, and a massive shift in advertising dollars.

What I think this means for all of us is that we’re going to have to work together to make sure the important stories in our area still get told. We can no longer rely on an ancient out of state corporation to pay people to do that.  Hopefully in some cases we’ll be able to pool our financial resources to pay professionals to do at least some of the big lifting. But much of the time it’s going to be up to you to keep an eye out, speak out, and take the time to write about the stories that affect you and your neighbors.

Luckily the same technology that is changing the landscape for newspapers also enables all of us to participate in a completely new way. Sites like this allow you to log on and write about the things you care about.  Post a story, review a local business, participate in the discussion, support the site with your advertising, send us news tips, and use the 5-star ratings tools to give your editorial feedback about other people’s submissions.  Community organization, participation, and self-sufficiency is our best hope of keeping the news alive in this new era.

Make sure you’re a part of it.