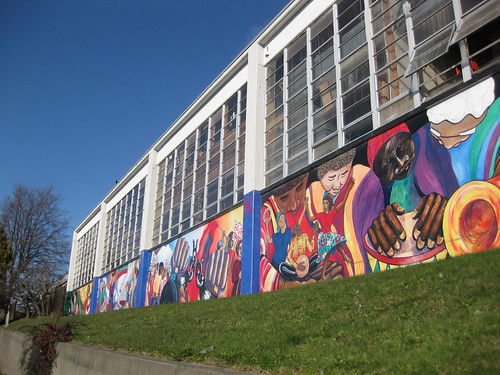 There’s rumors flying down in Judkins Park about the Seattle Central Community College’s woodworking school and possible changes in the way they use their large piece of property along 23rd Avenue South. This morning I spoke to Laura Mansfield, SCCC Director of Communications, and was able to knock down one rumor and confirm another.

Ms. Mansfield told me that change is definitely coming to the campus, courtesy of a $26 million capital project grant from the state to build a new core instructional building for the school.  This project would replace the big building that currently sits on the south end of the property at the corner of 23rd & Lane. The project is currently in the design phase, but they have the money in hand and want to get started “as soon as possible.”

There was also a rumor about the woodworking programs being moved to another SCCC facility down in Georgetown, with the existing property in the Central District then offered up for sale to developers.  Ms. Mansfield said that administrators did discuss that option but ultimately decided to keep the woodworking school on 23rd and proceed with the rehabilitation of that campus.

There’s a nice mural along the west side of the building that would be replaced under the new development plan, and I’ve spoken to one neighbor who’s concerned about it being destroyed with the old building.  Ms. Mansfield said she hadn’t heard about that concern before, but encouraged people to make their thoughts known at an upcoming open house for the redevelopment.