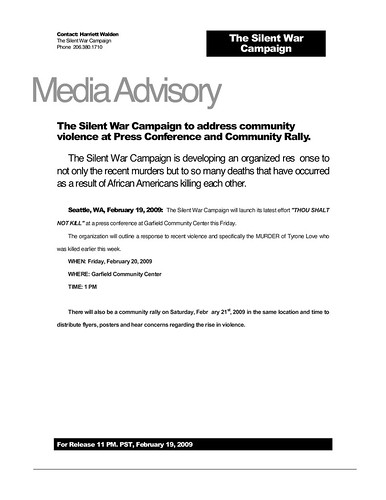 The Silent War Campaign is developing an organized response to not only the recent murders but to so many deaths that have occurred as a result of African Americans killing each other.

Seattle, WA, February 19, 2009: The Silent War Campaign will launch its latest effort “THOU SHALT NOT KILL” at a press conference at Garfield Community Center this Friday.

The organization will outline a response to recent violence and specifically the MURDER of Tyrone Love who was killed earlier this week.

There will also be a community rally on Saturday, February 21st, 2009 in the same location and time to distribute flyers, posters and hear concerns regarding the rise in violence.

0 thoughts on “Event: Community response to the death of youth black men”