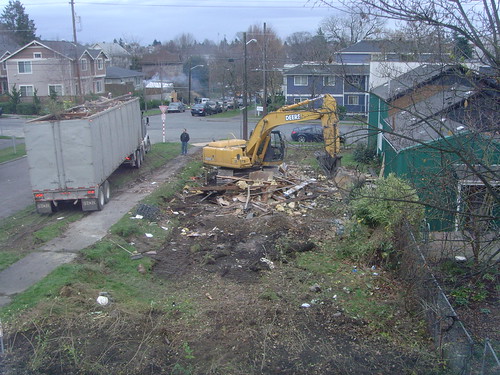 This morning a big yellow mechanical arm showed up with it’s pal a open-top tractor-trailer, and began pulverizing the abandoned house next to Seven Star Women’s Kung-fu. The project has been progressing all day. At 3:56 pm, with the house now gone, the arm is has just removed the fencing and vegetation along the sidewalk and alley. The gents overseeing the operation told me that some amount of soil will be removed soon too.
I will investigate more what is going to happen to this lot, which hasnow been scraped to dirt with sparse bits of debris. (The house apparently had no basement.)
The most amusing part, and testament to the mechanical arm driver’s skill: Two days ago Seattle Light detached the powerline to that house that ran from the pole in the alley. They reattached the loose end to the telephone pole on the SW corner of 21st and James, leaving the line strung half the length of the block over the sidewalk, marked along its length with yellow/black flagging. The arm has had to raise every single scoop over that line to deposit the detritus in the semi trailer. Watching the driver do this without snapping the line has been impressive.

This house has been abandoned for at least 2.5 years (the time I’ve lived here), and I do not know who owns the house. There is a rumor that the man who did own the house died there some time ago, this is unsubstantiated.

Hopefully more news soon as I learn what is to become of this lot.

UPDATE: I see a Seattle City Light truck (phps Utilities) on 21st now, not sure what he’s up to.

UPDATE x3: The word from the workers there is that the next stage will occur next weekend, Dec. 20th, with a dig down for the foundation. The soil removal will go all the way to the alley. The plan is to put “two homes” there, which was described as “looking like condos” since they will be packed in so close.