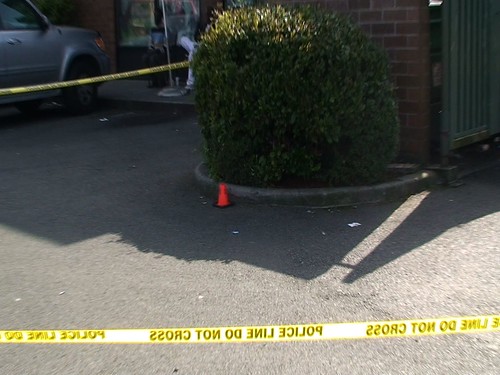 Today at about 3:50pm, two men were arguing in the parking lot just to the south of the Bank of America branch at 23rd & Jackson (just west of the Red Apple market). The fight escalated, and one of the men pulled out a gun and shot the other in the neck. The victim, an 18 year old black male, called 911 and made his way into the bank branch for help.

But the perpetrator picked the wrong day for a crime at that location, as there was a large police contingent in the area due to one of the May Day marches that was getting started a few blocks away. An officer heard the radio report of the 911 call and immediately identified a suspect running north through the parking lot. As the suspect passed Starbucks, he tossed a gun into bushes at the rear of the store. Police caught up to the suspect in the 2300 block of Main and held him at gunpoint until additional officers arrived.

The victim was treated by medics at the scene for about 45 minutes before being taken to Harborview. His status is not known at this time.

Update: 10:00pm – Seattle police are now confirming that they have arrested the only suspect in the case. He is juvenile and has been booked into the King County youth detention center at 14th & Alder for felony assault. The victim, who they’re now saying was shot in the neck and/or the face, is in critical condition at Harborview.

Realtime Report:
3:50pm – We’re hearing that someone has been shot near the Bank of America at 23rd & Jackson. Police have a suspect on the ground under gunpoint at 23rd & Main. They’ve also recovered located a black revolver near Starbucks.

Victim shot in the forehead neck.

Evidently he was shot outside near the parking lot and ran into the bank for help.

gatortv is on the scene, says that there was a bike on the ground near where the suspect was apprehended. That may have been his escape vehicle.

Witnesses are being brought over to ID the suspect.

Evidently medics are keeping the victim at the scene for now. Calls are going out to bring blood.

Original call came in to 911 from the victim, saying he had been shot. Police happened to be in the area, allowing them to get the suspect as he was fleeing.

4:27pm – Just got video from the scene- uploading soon

5:06pm – Just finished the press conference. The victim and suspect were arguing in the parking lot outside the bank, when it escalated and the suspect drew a gun and shot the victim in the neck. The victim called 911 and went into the bank for help.

5:28pm – Apologies for the quality of the video. The crowd at the scene was pretty hostile. Video of the press conference is encoding now and should be available at about 6:15pm

More info as we get it…

0 thoughts on “Man Shot near Bank of America – Updated”