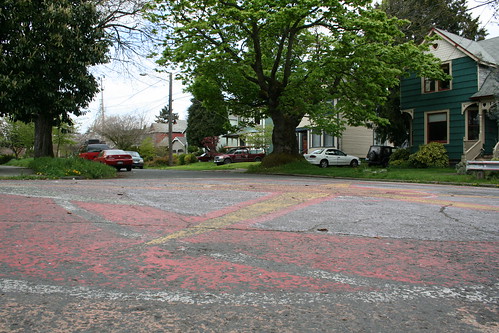 Today we bring you another reminder that if you fight for change along enough, victory can be yours. For 10 years along a stretch of 20th Avenue, neighbors have cringed at the out-of-control speeding and careless driving. Cars hitting 50 miles an hour is not unusual, especially since the street is basically a straightaway with NO traffic calming measures in place from Cherry to Union. (Crafty drivers will use 20th as a faster route to get around traffic on 23rd or 19th.) Every now and then, nearby homeowners tell us they walk outside to find that their vehicle has been sideswiped. Not good. But change is coming to 20th and Marion.

Brenda Neuweiler (owner of the popular JustFoodToGo.com catering service) along with a small group of dedicated neighbors, including Dena and Misty, are hoping that a new traffic circle and a pair of “chicanes” will get people to hit the brakes. (You’ve seen chicanes before. They’re those bits of land or pavement that jut out into the street. You have to drive around them.) After nearly a decade of lobbying the city, the neighbors tracked down grant money to put the traffic slowing measures in place. Pink lines on the street now mark where the work will be done. Brenda tells me it was all a “slow process” and that many nearly “gave up.” But a neighborhood meeting not too long ago re-energized them to keep up the good fight. Here’s part of an email she sent:

June 07 we applied for a Street Calming Grant $15,000. through the Neighborhood Street Fund and were notified in the fall of 07 that we received it. In January 08 we met with our city Rep Jane Rebelowski who is handling the process with us till completion. I had to canvas the neighbors between union and marion and get 65 percent of overall signatures for approval. After that was completed I got the radar gun for 3 days and now we have an auto speed sign registering all traffic driving north and south. Construction and completion is scheduled for sometime this summer. Thomas Whittemore is with the Dept. of Neighborhoods and is another great source for information.

An “auto speed sign” is one of those big digital boards that tell you how fast you’re allegedly going, usually seen in construction zones, though it’s no longer there at the intersection. The neighbors, along with the city, had to document traffic and speeds in the area. Two years ago, neighbors actually had the pavement at the intersection of 20th and Marion painted with a colorful design with a few hundreds dollars in grant money and the city’s help. It was a temporary solution to get drivers’ attention and get them to slow down — that’s no longer doing the trick. Now they wait and wonder if these new “permanent” additions will make the street a little bit safer.

Brenda says if you’re interested in trying to add traffic circles or chicanes to your neighborhood, get ready to be persistent and to “keep at it.” She recommends checking with the city’s Department of Transportation to find out who your representative for traffic calming might be. To borrow that radar gun to measure speeds, there’s a lengthy waitlist. Start investigating the possibilities of grant money (because the city itself won’t be dishing out the cash.) And, as always, get ready to get involved, and talk with neighbors.