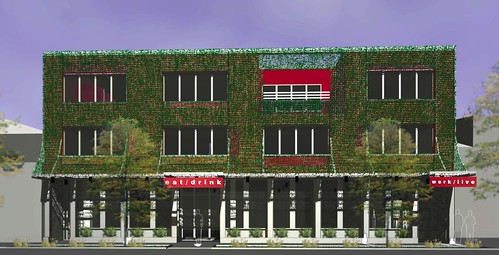 The 3-story project is proposed to replace a parking lot on a block that contains only single-family homes and a few one-story commercial buildings. The new building would extend all the way to the lot line on the west (street), north, and south sides. The neighbors to the north and south are especially concerned about the shadows casted by the building and the mostly-blank 32-foot high wall that will stand right at their property line. One of those residents referred to the project as “an affront to our household”.

Several neighbors said that they support more density in the neighborhood, but that this is actually a very large but still low-density project. They do have a point there: the entire top floor of the building is a single 6,000 square foot residence/art studio. That kind of space is big enough to fit five to six apartments. The second floor is all office space, designed for professionals such as lawyers, etc. And the first floor is about 50% retail space and 50% parking garage with room for 9 vehicles.

That rear-exiting garage is another sore point for the neighbors to the east. They’re concerned about the ability for a narrow, single-lane alley to handle the volume of cars that will be coming and going from the building. And loss of privacy was another major issue. One neighbor, in the classic socks-and-birkenstocks style of Seattle, noted that neighbors along that alley make an additional family room out of their backyard decks during the summer. Vehicle traffic, peering eyes from 25 feet up, light pollution, daytime shadows and noise will keep them from enjoying their space as they’re accustomed to.

And in what was possibly a first for a design review in Seattle, Harry Levin, the property owner to the north of the new development, concluded his list of grievances with a musical interlude of Joni Mitchell’s “Big Yellow Taxi” (“paved paradise and put in a parking lot”). Coming near the end of a long night, the board members didn’t really seem too enjoy it.

As for the review board, they were very complementary of the design put together by Todd Smith, the architect on the project. In fact, even some of the most strident opponents of the project said they appreciated the work he has put into the project and his willingness to listen to neighborhood concerns. He’s evidently between a rock and a hard place, working for a “problematic client” (according to neighbors) with a “difficult personality”, and faced with such overwhelming opposition from people surrounding the project.

The architect received praise from board members for his choice of brick on the face of the upper two stories and his use of red painted highlights for the insets on the facade. Personally, I think it’s a bit odd (and a maintenance challenge) to cover nice brick work with the wire lattice and descending vines from the roof, but that did help him achieve a very high “green level” for the project. The only thing board members weren’t sold on was the lack of continuity between the first floor and the two stories above it. And another architect in the room warned that the building was too expensive as designed, and to expect a bait-and-switch redesign in the near future with much cheaper materials.

I understand the neighbor’s opposition. I sure wouldn’t want a 3-story wall to suddenly pop up and block all the light into my house. But the project is compatible with the commercial zoning for that block, so there’s not a whole lot they can do. The neighbors I spoke to seem to understand that, and acknowledge that if the project does get built they’ll just have to live with it.

You can see the entire proposal at: http://www.seattle.gov/dpd/AppDocs/GroupMeetings/DRProposal3005396AgendaID2195.pdf 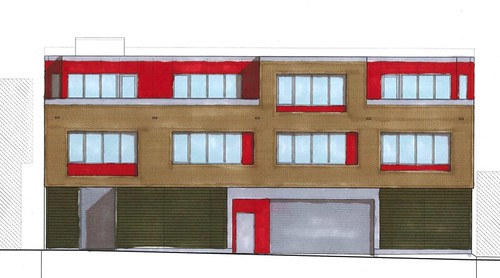 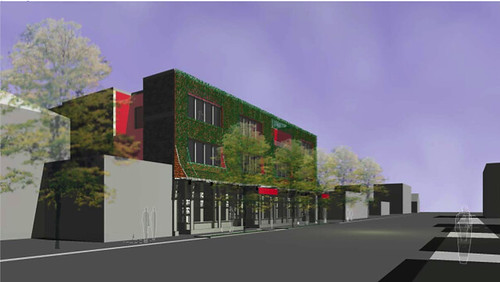 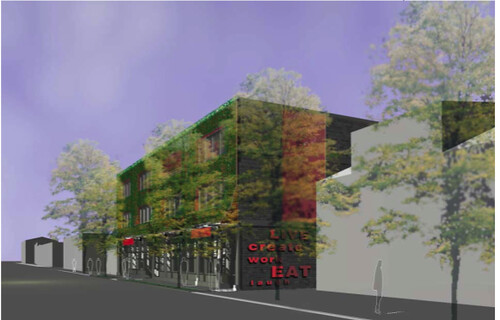 0 thoughts on “Madrona Neighbors Up In Arms About New Development”