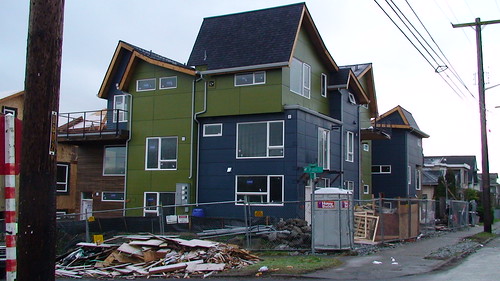 There’s a big fire response right now at 19th & Pine St., at the site of some brand-new townhouses. Although I don’t know for sure, I don’t think that the homes were occupied yet. Let’s hope that’s the case.

Update: Helen Fitzpatrick from the Seattle Fire Department says that the call came in at 5:30am for smoke coming from the under-construction townhomes. Firefighters arrived to find fire on the second floor, and that it had burned down into the first floor and into the walls and ceiling. There was no power to the building, and no injuries since it was unoccupied.

There were some comments on the radio that it was a “set fire”, i.e. arson. However, Ms. Fitzpatrick says there’s no reason to believe that’s the case right now. Fire investigators are on the scene and should know more later this afternoon. Damage is estimated at $35k.

Update x2: Investigators have determined that this was an accidental fire that had been smoldering in the space between the 1st & 2nd floors. Although the damage was too extensive to pinpoint an exact cause, the most likely candidate is either a discarded cigarette or oily rags.