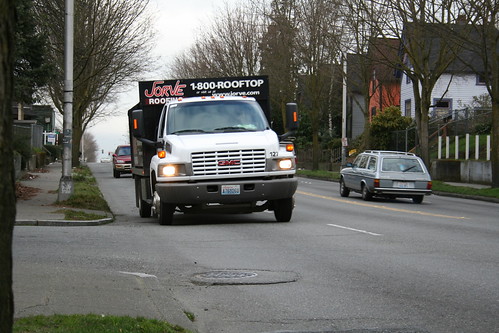 Remember our chat back in January about changing 23rd Ave to two lanes? I was surprised that the overwhelming majority of commenters came out firmly against it. But yesterday the Hugeasscity blog came up with some interesting data to add to the discussion:

– The right-of-way for 23rd Ave is only 60 feet wide. Side streets such as Marion are actually wider than that, and the 2-lane MLK has an 85 foot ROW.
– There’s many two-lane arterials in the city that carry the same amount of traffic that the 4-lane 23rd does now

It has always seemed to me that 23rd was basically created as a narrow neighborhood side street. Then cars came along and someone at the city decided to shoehorn 4 lanes of traffic into the corridor without going to the trouble to buy property and widen it enough to support an arterial.

But I thought Hugeasscity’s most interesting point was the possible connection between the bad pedestrian environment on 23rd and the crime issues that we all want to solve at 23rd & Union. Would more law abiding citizens walk on 23rd if there weren’t big trucks and busses whizzing by just a couple feet away? Would a better physical street environment encourage better development and new businesses in the area? Is the level of criminal activity on a street directly proportional to the narrowness of its sidewalks and abundance of its vehicle traffic?

And maybe the most important question: Would you tolerate being slowed down a bit at rush hour if it resulted in an improvement to a variety of other neighborhood ills?

I think I would…

0 thoughts on “Dear 23rd Ave: You’re Too Skinny And Need A Diet”