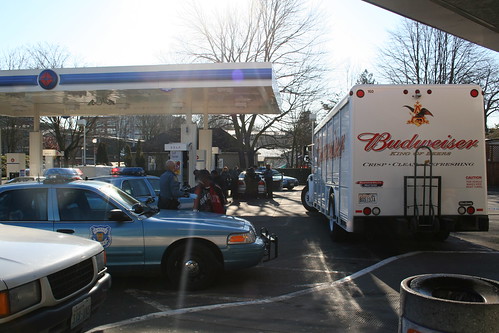 9:22am – Boylston & Madison – Vehicle/Pedestrian accident. Appears to be pretty bad, as 3 fire/medic units have responded to the scene.

11:38am – 23rd & Cherry – Stolen vehicle found occupied at AM/PM. 3 subjects inside, young black males either junior high or early high school age. They all had their book bags and were dressed like they were on their way to school. All taken into custody.

1:16pm – Madrona Elementary – Suspect, who is known to carry weapons and lives near the school, making threats against someone at the school.

2:03pm – 300 block of 20th Ave – Officers flagged down by woman who said she was hit by a beer can thrown by the occupant of an apartment.

2:25pm – Minor Elementary School – Father needs to speak to police. His child was expelled because of comments about a teacher, who the child claims to have had sex with (?!)

2:45pm – 400 block of Boren – Resident of an apartment was threatened by a person doing work on the apartment. Yelling heard in the background.

4:05pm – Goodwill – Security chasing a shoplifter who drove away westbound in a brown oldsmobile SUV

4:45pm – 400 block of 11th Ave – Suspicious circumstances – Caller’s cousin arrived home with blood on his clothes and a stab wound to the arm. He left for the hospital, but left a 3-year old son behind and no explanation for his situation.

4:57pm – 400 block of 15th Ave E – Suspicious Person – Caller spots a man that looks like both a transient and the 15th & Howell killer. Described as a white male, mid 20s, blue hoody, green kaki pants, carrying a blue pillow, red/white table cloth, and a pink club (?). And we all thought that he was safely locked up in the Monroe correctional facility. Crusty cop: “Copy, maybe they could tune into the news about the person of interest.” Dispatch: “Yeah, my thoughts, but what are ya gonna do”.

6:34pm – 1500 block of 24th Ave – Someone threw a rock at the complainant’s window from the alley, failing to break it. Suspect was not seen. 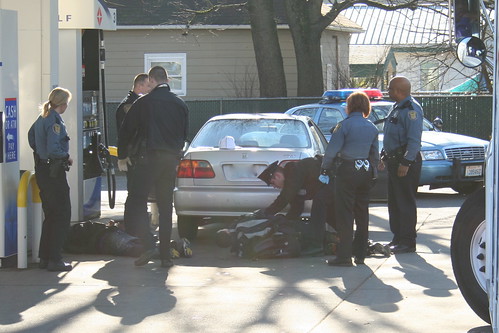