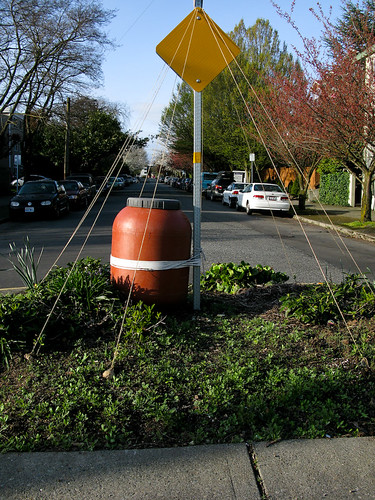 The 23rd Ave corridor is arguably the most neglected transit corridor east of I-5. For years the Seattle Department of Transportation has recognized the need for street and pedestrian improvements. Now it’s finally happening through two concurrent projects: a $46 million overhaul of 23rd Avenue and a greenway slated to run parallel to 23rd one or two blocks away.

Details of both projects are getting hammered out now, including how each can move forward without running into each other’s path. At a well-attended and — at times — testy November 6th meeting to gather public input on the greenway, much of the discussion turned towards the 23rd Ave corridor project.

Some people in the session ended up pretty damn angry about the whole thing.

But there’s no reason to be pissed. In fact, the greenway could be pretty damn cool.

The 23rd Avenue greenway is likely to be the longest greenway in the city as it wends its way through residential streets parallel to arterial roads. Through a mix of signage, pavement markings, speed bumps, roundabouts and other traffic-calming features, greenways attempt to encourage more people to walk and bike to their destinations. Here’s a greenway FAQ in case you wanted to know, among other things, if greenways will make you happier.

According to SDOT’s Maribel Cruz, some attendees at the confusing meeting early this month were particularly concerned that construction and narrowing of 23rd would create spillover traffic onto the proposed greenway.

“Based on our modeling and traffic counts, we don’t see that huge of a change,” Cruz told CHS. “There would be a minute to minute-and-a-half addition through the four mile stretch of the corridor.” Cruz says planners don’t think that slowdown would be enough to push cars toward the greenway. Still, Cruz said the city needs to do a better job of being prepared to talk about both projects in future public meetings.

They’ll have some time. The next greenway won’t be until sometime in early 2014. Prior to that Cruz said SDOT would be posting an online survey to gather more feedback on the greenway. Once a route is picked, design would likely wrap up in March. Ideally, she said the greenway would be finished before construction on 23rd starts next fall.

Seattle Neighborhood Greenways, the group that initiated the 23rd Ave project, hopes to eventually create a network of connecting greenways throughout the city. SDOT has an internal group studying how to make it happen.

The 23rd Ave greenway is still in the early conceptual design phase. Cruz said the city won’t move forward on details of the plan until the actual route is picked. Four avenues — 21st, 22nd, 24th, and 25th — are still up for consideration. Cruz said both east side and west side options have compelling pros and cons (so speak your piece now).

Drawbacks for 24th and 25th include poorer pavement conditions north of Madison, steep cross streets, and a nightmare crossing over Madison and John in the same intersection. On the plus side, 24th and 25th offer good access to schools and amenities including Garfield High School and the arboretum.

For 21st and 22nd, the hilly terrain and lack of a straight route between Galer and Boyer would present some of the biggest challenges to cyclists. Otherwise, the crossing at Madison is simpler and the west side options would provide easier access to the Miller Community Center and Capitol Hill. The west side also has more pre-existing traffic calming features with roundabouts and double-sided parking.

Whether you’re driving, bussing, or biking, 23rd serves as a major connector between the Central District, eastern Capitol Hill and Montlake and the greenway has the possibility to make all of those modes of transportation more enjoyable.

“There’s a lot of support for greenways, and its an exciting opportunity for the neighborhood to have something built on their street,” Cruz said.

More on the 23rd Ave Greenway

16 thoughts on “What exactly will the 23rd Ave greenway be? It’s up to you”