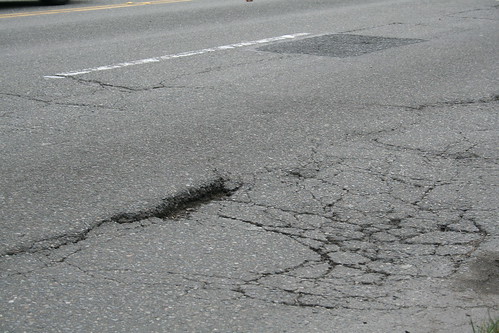 There was a post last week on the Miller Park blog that got me thinking. The subject was the poor condition of 23rd Ave, and I remember getting a map during last year’s campaign for the “Bridging the Gap” road levy that showed 23rd as one of the arterials that would be fixed up and re-striped to add bike lanes.

It’s been over a year since then without any activity, so I sent an email to SDOT to try and figure out what the official plan was for the major N/S thoroughfare in our neighborhood. Peg Nielsen got back to me with some details.

As far as general repaving goes, 23rd Ave between Cherry Madison is “an identified 20-year paving need”, but it is NOT on the list of projects that will be done in the nine-year first phase of the Bridging the Gap program, and is not otherwise scheduled to be fixed. That doesn’t necessarily mean that it will be allowed to continue to deteriorate for the next 10 years, but there is no current plan to fix it up.

23rd Ave, between E Madison and E Jackson streets, has been identified as a potential arterial for bike lanes, but it must first be studied (traffic counts, turning at intersections, access to adjacent businesses etc). Were the studies to provide positive results that the bike lane could be installed while maintaining safety and accessability for all the arterial users – pedestrians, bicyclists, motorists – then that lane marking would be installed at the very earliest in the end of this year, but more likely, next year or in 2009.

23rd is fairly narrow for a 4-lane roadway as it is, so adding bicycle lanes would have to mean getting rid of some traffic lanes. I would guess it would go to 2 traffic lanes with a center turn lane and the typical bike lanes on the shoulders. Now as both a bike rider and a resident of 23rd, I’m all for anything that would lessen the speed and volume of traffic, so that sounds great to me.

But I’m curious what everyone else thinks: Would you mind losing 2 vehicle lanes from 23rd? Leave your opinion in the comments below.

UPDATE:
Ms. Nielsen provided a further update and clarification on the prioritization of 23rd:

We are making great progress with the aid of Bridging the Gap (BTG) funding – in 2007 we paved 27 miles of roadway and this year we will pave 36 miles. There are many arterials in the city that need significant work and the BTG funds enable us to fix far more than in the past.

While we recognize the need on 23rd Avenue, we do have an order of priority. Although the planned paving map on our BTG website shows 23rd as a major arterial to be paved, it is not among the most “critical” arterials for which the funding must first be used. When comparing 23rd Ave, between Madison and Yesler, to the other critical major arterials, it is actually in far better condition and carries less than half the traffic and freight volumes than those arterials slated for paving first. We are trying to stretch our BTG funds to cover paving needs as soon as possible, but face constraints based on material and construction costs.

In the 2004 Pavement Condition Report, the link for which I am pasting below, you will note that 23rd Ave between Madison and Yesler is on our priority list; however you’ll also find in the report all the factors that are considered when determining the paving which must be done first. http://www.cityofseattle.net/transportation/pavementrpt.htm It also helps explain ideas like the 20-year paving need.

At this time, we do not yet have 23rd Ave on the paving schedule, but please keep in mind that it continues to move up the list as we pave higher priority arterials. In the meantime, please urge your neighbors to call in potholes to our pothole hotline (386-1218) as we do make repairs within two business days and repairing the holes is the best way to prevent further deterioration.