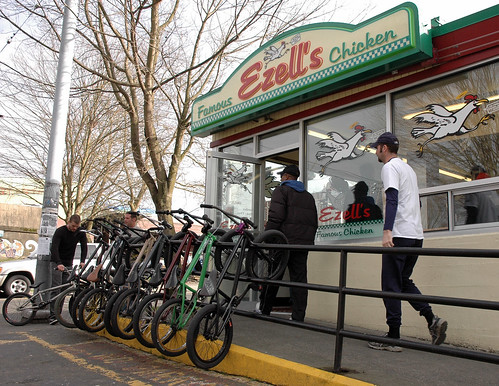 Last week, public comment about the latest draft of the Seattle Bike Master Plan wrapped up but the conversation on the next wave of the city’s bicycle planning has really just begun. Below, we’ve shared a look at the latest plan updates. You can provide your thoughts and feedback on the plan to the Seattle City Council transportation committee (email) who will take the plan up for discussion in September. For more on the planning process, check out Seattle.gov’s Seattle Bicycle Master Plan page.

By Tom Fucoloro/Seattle Bike Blog
In general, the updated Bike Master Plan includes a lot of bold and smart projects. We noted many in our analysis of the first draft. This post focuses mainly on the changes between drafts.

The biggest changes between the bold (almost surprisingly so) first draft and new one are on some of the busier streets in the Capitol Hill, First Hill, Central District and downtown areas. For example, protected bike lanes on Madison, Boren and Fairview have been dropped entirely.

But some exciting ideas have been added, like an extended protected bikeway on 10th Ave E from 520 (and its proposed bike path) to the under-construction Broadway Bikeway. The plan also calls for protected bike lanes on Pike Street from 2nd Ave to Broadway (which should be extended to Madison). Both are ideas we suggested in our analysis of the first draft. We have a few tweaks and small change suggestions that we’ll get to later in this post. But the elephant in the room is the omission of any kind of bike facility on 23rd/24th Avenues from the Montlake Bridge to Rainier Ave, especially the section through the Central District.

I argued previously in favor of installing protected bike lanes on 23rd Ave. But planners are now no longer proposing any bike facilities on the road, instead pitching a parallel neighborhood greenway.

South Lake Union is an awful place to cycle today, and the plans will do little to improve that. 9th Avenue simply does not cut it as the neighborhood’s primary north-south bike route. While it might be difficult and require some creative road design work, Westlake Ave from downtown to the planned cycle track along the lake is a must if South Lake Union ever wants to be anything other than miserable for people on bikes.

Not only is Westlake the flattest and most direct route to downtown, but people still crash on the streetcar tracks regularly. It is simply not acceptable to say that we will do nothing to fix the situation for the next 20 years.

There are a few small gaps that should be filled in the plan. For example, Madison Street from Lake Washington Boulevard to MLK and the Madison Valley commercial district is a must (west of MLK, Madison gets crazy steep). There’s also plenty of road space, and the street is more dangerous than it needs to be. Thus it is a perfect candidate for a protected bikeway and a great connection for people heading into the Central District.

A bold and promising Rainier Ave protected bikeway is planned from MLK to Dearborn. That plan should be extended on Rainier to Jackson, which already has well-used bike lanes heading east into the CD. This could also provide a connection to the Yesler bike lanes and the Broadway Bikeway for those heading to First Hill.

Jackson remains a disappointment. A perfect candidate for a quality bikeway, the plan only calls for sharrows. A parallel bikeway on King Street (a neighborhood greenway probably won’t work, at least in the busy ID) could be good for people traveling between the ID and the CD, but does nothing for people trying to get to and from Pioneer Square or the Alaskan Way Bikeway.

29th Ave makes very little sense as a neighborhood greenway route (at least north of Spring or so) because it runs into a wall at Union.

The downtown plans are pretty solid. Beyond what I’ve already said about Jackson, I have few additions.

There should be a route noted connecting the waterfront to Pike Place Market along the planned promenade park thingy.

I also find 9th Ave between Denny and Pike/Pine to be a fantastic bike route with low-traffic (read: Easy option for a quality bikeway) and an excellent grade for people planning to climb up Capitol Hill.

Plans for a bikeway on the Denny Way crossing at I-5 should be added back to the plan, even if it is only between Melrose and Stewart. It’s a steep and busy road, sure, but it is heavily-used already and there are no other good options nearby for people traveling between downtown/SLU and Seattle’s densest neighborhood.

15th Ave E along and north of Volunteer Park is a must. It’s a heavily-use bike route today with room for improvements and no real alternative options.

Boylston Ave E north of the I-5 Colonnade Park should at least have bike lanes if not a protected facility. It’s a popular route that will only get more popular if/when the 520 trail is completed. The hill is so steep in the Eastlake neighborhood that, while it looks easy enough on a map to just hop over a block to Franklin, it’s not.

7 thoughts on “The Seattle Bike Master Plan and Central Seattle”