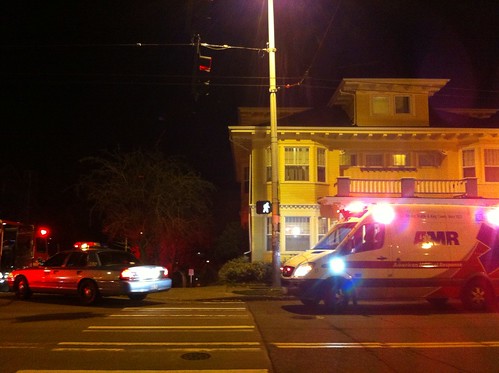 A drive-by shooting Monday night struck a home at 23rd and Alder, sending one man to the hospital, according to one neighbor.

The shooting occurred around 10:10 p.m. aimed at the building on the northwest corner. One neighbor said he called 911 when he heard the shots. He said a vehicle honked three times, then fired four shots before speeding off.

The neighbor said one man was struck in the arm and taken to the hospital. We have yet to confirm these details with officials.

Police at the scene declined to give any details, but confirmed that there was no need to worry about an ongoing threat in the area.

The vehicle may have been a dark SUV, but the neighbor did not get a good look.

A nearby house was the target of an October 20 arson. A $10,000 reward was set for information in that case. There is no indication that the incidents are connected.

UPDATE: SPD confirmed via Twitter that a man was shot in the elbow:

UPDATE: SPD has posted more details on the Blotter:

A 20-year-old self-professed gang member was wounded in a shooting outside a Central District home Monday evening.

Around 10:15pm Monday night, the 20-year-old man was walking up to a home on 23rd Avenue and E. Alder Street when a dark-colored four door sedan rolled down the street behind him. Someone in the back seat of the car stuck a gun out the car’s window and fired at least three shots, striking the victim in his arm. The suspects then sped off.

At the scene, several witnesses admitted they had heard the shooting, but refused to provide officers with any other information.

Medics arrived and transported the victim—who admitted to police that he is a member of a Central District gang—to Harborview for treatment.