A $1 million high-tech gunshot locator system was among the cuts the City Council is planning to make to Mayor McGinn’s proposed 2013-14 budget. The budget changes were announced Friday, and the Council will make their final budget vote November 19.

The gunshot locator uses microphones and cameras located in gun violence hot spot areas that help the city quickly identify the exact location of a gunshot. The system is also capable of discerning the difference between gunshots and other sounds commonly mistaken for shots (such as fireworks and backfiring car engines). In lieu of the nearly $1 million gunshot locator system, the Council added $1 million worth of violent crime prevention emphasis patrols in 2013 and funding for additional SPD officers in 2014.

The mayor’s budget included $1.68 million to expand the Youth Violence Prevention Initiative, which was started after an uptick in youth gun violence in 2008. The Council is planning to hold $1 million of that funding until the City Auditor completes an evaluation of the program. The Council does not expect the changes to affect current program operations.

Funding in the mayor’s proposed budget for additional hours of operation at Yesler Community Center appear to still be intact. 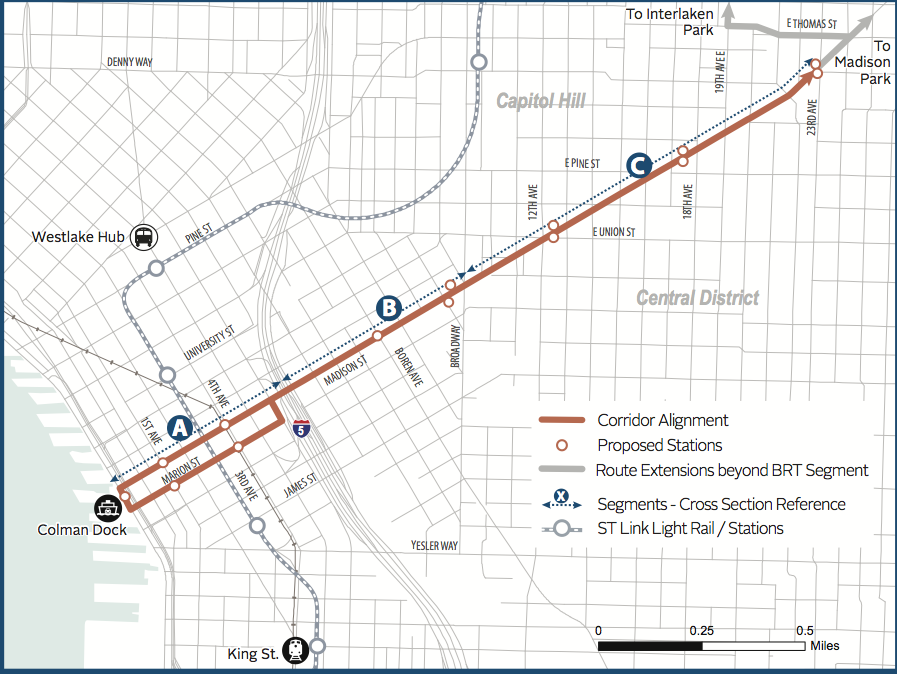 While the Council plans to cut funding for two high capacity transit studies (a likely streetcar extension to the U District via Eastlake Ave and a potential transit/bike/walk bridge across the Ship Canal somewhere between Fremont and Ballard) they have added $150,000 to boost the Madison Street Bus Rapid Transit project.

Though Madison is too steep for a streetcar, it is a high-potential corridor for faster and more frequent transit, according the recently-approved Transit Master Plan. The line would go between Colman Dock and 23rd Ave, and buses would run every five minutes for most of the day. The plan could include streetcar-like features such as bus-priority travel lanes, widely-spaced stops for faster movement, loading platforms that allow for fast loading even for people with mobility issues, and perhaps even the ability to pay at the stop platform instead of on the bus.

Here’s a look at the Council’s proposed changes to the mayor’s budget: