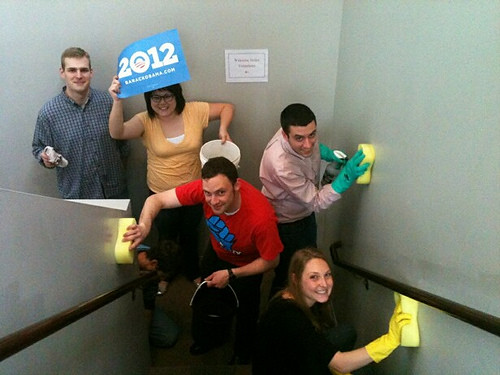 A break-in at the Seattle campaign headquarters for the state Democratic Party, Jay Inslee and Barack Obama early on election day does, indeed, seem to be more than a “routine” burglary, the Associated Press reports.

The break-in at Rainier and S Charles St was discovered just 14 hours before the state polls closed. Though the burglars tried to make it seem like a random burglary, they seemed to target items belonging to key campaign staffers.

From the AP (via the Seattle Times):

“Unless we know who the suspects are, it’s kind of hard to figure out a motive,” spokesman Mark Jamieson said Thursday.

Workers arriving about 5:30 a.m. Nov. 6 found the front door smashed. Police secured the building and found offices ransacked. In addition to the Democratic Party, the building held offices for Jay Inslee’s campaign for governor and Organizing for America, the campaign to re-elect President Barack Obama.

A window had been broken to get into a director’s office and confidential files were rifled through and moved. Other offices that were hit included the media coordinator and fundraising section. A trash can was dumped and used to haul away the stolen property.

The majority of items taken belonged to people who “were of major importance to the campaigns,” the report states.

Several computers and alcoholic beverages were left untouched, according to the report.