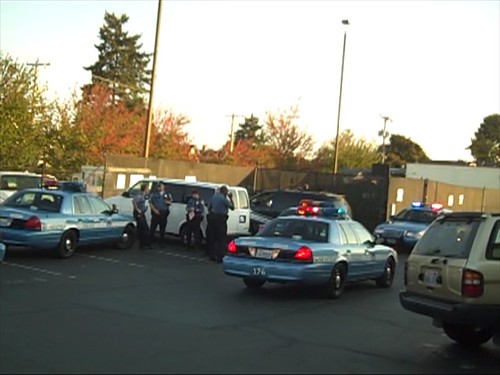 The use of force against a hit-and-run suspect in the parking lot of the Midtown Center at 23rd and Union Saturday is under investigation after several witnesses and CDNews raised questions.

Witnesses told CDNews they saw an SPD officer use force when arresting a man Saturday shortly after 4 p.m. Two witnesses we spoke with described an officer using both hands to choke the man after he resisted being placed in handcuffs.

After the struggle, the man was bleeding significantly from a cut near his eye, the witnesses said. One witness said an officer punched the man, causing the cut. The injuries were significant enough that the man was taken to the hospital in an ambulance.

The man, Leo Etherly, has been charged with one count of assault and one count of hit-and-run. He pleaded not guilty to the charges Monday in Seattle Municipal Court.

After several attempts to get information about the incident (we were originally told there was no record of it), CDNews obtained the police report, which contains no mention of the use of force, choking or punching (UPDATE: Details about use of force typically end up in a separate use of force report, SPD tells CDNews). It simply states the suspect spit on officers and “was then taken into custody.”

Police stopped the suspect because they suspected him of hitting a person on a bicycle at 29th and Jefferson, then fleeing the scene. The license plate, vehicle and suspect descriptions were all similar to the descriptions from the hit-and-run, the police report says. The person on the bike was not seriously injured.

The official and witness accounts both state that officer approached the man in the parking lot and took him to a patrol car. When officers tried to get him to turn facing away from them so they could cuff him, he resisted. Officers then used force against him, attracting a crowd. Several witnesses told CDNews they were disturbed by that amount of force used.

Somebody may have been shooting video of the incident, according to witnesses, but CDNews has yet to see this video surface (if you know the person with footage, tell them to contact CDNews at [email protected]).

Potentially adding more fuel to the situation, one of the officers involved was Jonathan Chin, who had been accused of excessive force in a previous CD incident at 20th and Jackson. However, SPD spokesperson Mark Jamieson told CDNews Chin is not the officer who is under investigation in this case.

Here is SPD’s version of events, posted to the blotter:

Office of Professional Accountability (OPA) investigators are reviewing a weekend arrest of a suspect in a hit and run collision, 2012-342153.

Shortly after 4:30 p.m. on October 6th, 911 received a report that a driver of a white van had struck a bicyclist at 29th Avenue and East Jefferson Street and fled the scene.

Officers responding to the call spotted a similar van with a closely matching license plate in a parking lot less than a mile away from the scene of the collision. As officers pulled into the lot, they saw a man hurrying away from the van. Officers stopped him, believing him to be the suspect from the hit and run.

The 34-year-old man refused to answer officers’ questions or follow their directions.

Officers strongly believed that they had the right individual and attempted to place him under arrest. An officer readied handcuffs and took hold of the suspect’s left hand. The suspect pulled away, resisting arrest. Officers began to forcefully place the man into handcuffs but before they could do so, he spit a glob of saliva into the face of one officer. The other two officers were also struck by the suspect’s spit. Officers used additional force and took the man into custody.

The suspect sustained injury during the arrest and was provided immediate treatment from Seattle Fire Department medics. Per standard procedure, he was evaluated at Harborview Medical Center and was then booked into King County Jail for assaulting officers.

A particular force tactic employed by one arresting officer raised questions by the SPD chain of command and a decision was made to send the case to OPA for review.

The three officers who were spit upon declined treatment for exposure to potentially infectious material.

The cyclist was not seriously injured in the collision.