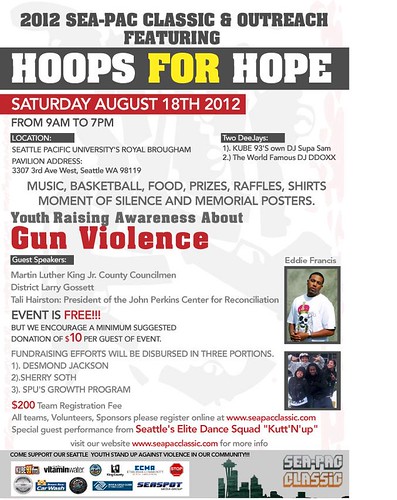 Deitrick Johnson lost “two amazing” friends this year. His longtime friend and CD resident Desmond Jackson was gunned down outside a Sodo nightclub in February, and his best friend Sherry Soth was killed in a shooting at a South Seattle party in July.

He grew up surrounded by violence. His grandfather was gunned down when he was four, before his family moved to Seattle. He and his friends stayed clean—neither Jackson nor Soth had so much as a traffic ticket on their records. Yet violence still found them, leaving Johnson devastated and looking for a way to have a positive impact.

Once, they hid their most-prized Pokémon cards in their socks when they sensed their elementary-school contraband was about to be confiscated. Soon after, Johnson moved to another school and the two lost touch.

When Johnson accompanied Soth to her senior prom at Ingraham High School, they bumped into Jackson. The trio, along with other friends, began hanging out together most weekends.

That ended on Feb. 12 when Jackson, 22, was gunned down outside a Sodo nightclub. Soth, 21, was fatally shot as she was leaving a South Seattle house party July 1.

Johnson has been involved in organizing two upcoming events outside the CD to help. Hoops for Hope is tomorrow (Saturday) at Seattle Pacific University, and Urbane Restaurant & Bar at 8th and Pine is donating a portion of Saturday evening’s proceeds to Soth’s family.