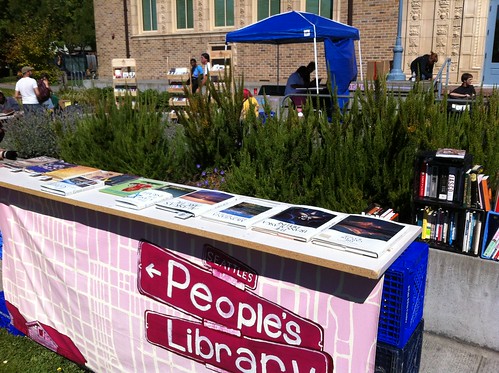 Justin at Capitol Hill Seattle called it “one of Seattle’s most pitiful traditions.”

Seattle Public Libraries are closed city-wide all this week for a budget-saving unpaid furlough period. But a group of activists have stepped up to try to fill the void in the Central District, building the Seattle People’s Library on the steps of the Douglass-Truth branch at 23rd and Yesler.

“The cool part is, we don’t even need to explain the issue of the austerity measures to people,” said Yates Coley, one of the many People’s Library organizers. After all, most people find the idea of libraries closing for a week every year ridiculous, as demonstrated by the healthy victory of the recent Library Levy, which passed with 65 percent of the vote. The levy should prevent furlough weeks for the next several years.

Organizing for the People’s Library started just ten days ago, but people were able to pull together a respectable (and growing) book collection, a couple computers with Internet access, free public wifi and a packed schedule of music and children’s storytime readings.

Less than an hour after opening, several people were parked around the Douglass-Truth lawn reading books while others took advantage of the free computers. Library computers are one of the few dependable sources of free Internet access for many CD residents.

Coley said the project has received the support of several librarians, and several even helped hand out fliers to library users.

And don’t worry: Although their books were mostly donated by book stores, residents and some leftovers from the Occupy Seattle libraries, the books are not unwanted titles.

“A lot of people have donated books they like,” said Coley.

The library plans to be open according to the Douglass-Truth operating hours through Sunday (Mon-Thu: 10am–8pm, Fri-Sat: 10am–6pm, Sun: 1–5pm).

They could use some volunteers to staff the library during the week and to do children’s readings. They could also use more children’s and classic book donations. And if you have some cash to put toward their moving truck rental, you can donate online.

Below is the tentative schedule for Monday. Check the Due To Budget Cuts blog for daily schedules of events:

3pm: Snacktime. Thanks to Eileen for bringing some Filipino noodles and eggrolls to share with everyone.

3pm- 5pm: Crafts for Kids (of all ages!). Make your own birdfeeder with pinecones and peanut butter. Materials provided. 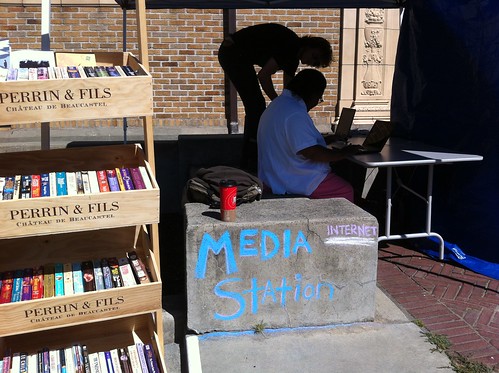 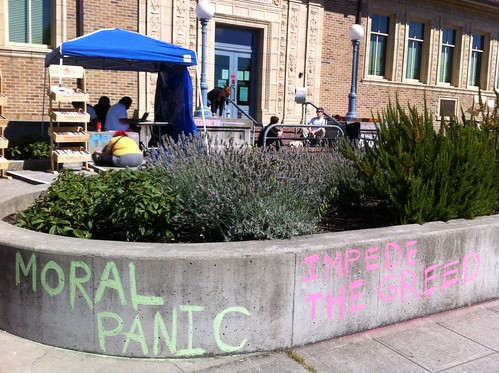