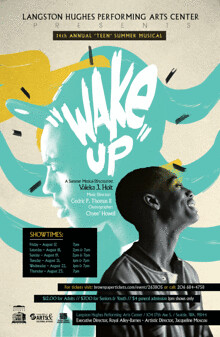 The Teen Summer Musical returns to the recently-renovated Langston Hughes Performing Arts Center with an original play about 16 high school students who “turn their obstacles into a passion for change to heal their broken generation.”

From the Parks Department Blog:

“Wake Up” is an original script written by teens

The beautifully restored Langston Hughes Performing Arts Center brings the much beloved Teen Summer Musical back, with an original script written by the teens.

“Wake Up”— the musical– broadcasts the thoughts, dreams and identity issues of 16 high school students who are tired of their voices not being heard and decide to do something BIG
about it. They turn their obstacles into a passion for change to heal their broken generation. No giving up, resorting to violence or casting a blind eye. These teens hook their audience with sympathetic characters and timely topical detail. Yet a raw and genuine agony pulses within the play and finally bursts through its sturdy framework, giving “Wake Up” an impact that lingers beyond its well-shaped, sentimental ending.

This teen ensemble embraces the classic revue format of skits, dance and music to create a strong theatrical piece with a clear-eyed celebration of youthful endurance. Genuinely refreshing, this is a true youth-led celebration of passion, purpose and perseverance.

LHPAC Artistic Director Jacqueline Moscou says “LHPAC is equipping the next generation of theatre artists with the tools to help them be part of the American Theatre movement. The courage, vulnerability, discipline and cooperative spirit required to work on an original piece is a huge challenge for them and an extraordinary opportunity for personal and artistic growth.”

LHPAC’s “Wake Up” artistic team features local grassroots artists ranging in age from 19-30 years. Director Valeka Holt, an accomplished actress, is a graduate of the Master of Theater/Professional Actors Program at the *University of Washington. Musical Director Cedric Thomas II has mastered the challenge of writing new songs. A talented musician, he has played music in Seattle churches and in various bands. Choreographer Chyée Howell loves dance and studied with Seattle’s EWAJO dance center. She has brought a fresh approach to choreographing a cast whose members are only slightly older than she is.

Ticket prices range from $4 to $12. Tickets are available through brownpapertickets.com or by calling 206-684-4758. Tickets are also available in person at LHPAC before each performance. Please note that the theater seats 278 persons.

LHPAC’s Summer Teen Musical Program is made possible through the generous support of Seattle Parks and Recreation, the Mayor’s Office of Arts and Cultural Affairs, 4Culture, and individual contributions. The musical began in 1996 as an opportunity for African American youth to learn theater. It has served more than 1,770 youth and provided wonderful memories to more than 75,000 audience members. LHPAC has been at the core of traditional and emerging art forms continuously for 40 years.

And please go easy on the wine.