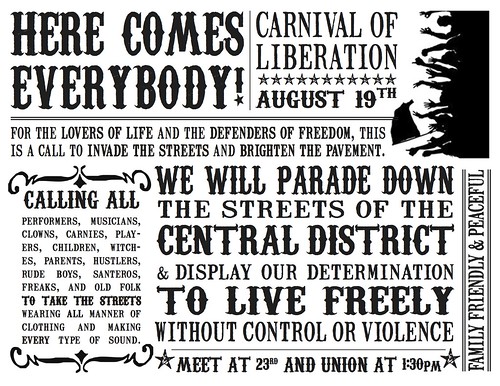 Billed as “a call to invade the streets and brighten the pavement,” the Here Comes Everybody Carnival of Liberation will begin at 1:30 p.m. Sunday at 23rd and Union.

Participants will “parade down the streets of the Central District and display our determination to live freely without coercion, control, or violence,” according to the event description.

For the lovers of life and the defenders of freedom, this is a call to invade the streets and brighten the pavement. The grid of the city blocks can neither tame nor contain us. Our spirits flow outside and beyond the rigid parameters of gentrification, development, and law. Our beauty is our inability to be defined, categorized, or placed in a cage.

On August 19th, 2012, we will parade down the streets of the Central District and display our determination to live freely without coercion, control, or violence. We are calling all performers, musicians, clowns, carnies, players, children, witches, parents, hustlers, rude boys, santeros, freaks, and old folks to take the streets wearing all manner of clothing and making every type of sound.

The carnival will be multiform and diverse by nature. No one will be turned away from this family friendly event. We strongly encourage the attendance of all who have a commitment to taking care of each other and creating a strong neighborhood that does not rely on the law or the police to maintain itself.

Bring banners to hang across the streets, cook decadent food to share with everyone, dress like a clown or a cat, paint the faces of your children, build a carriage to parade atop, wear Venetian masks, bring a boombox, smoke a blunt, dance in the street, bring your family, and get ready for a the best time of your life. See you there!