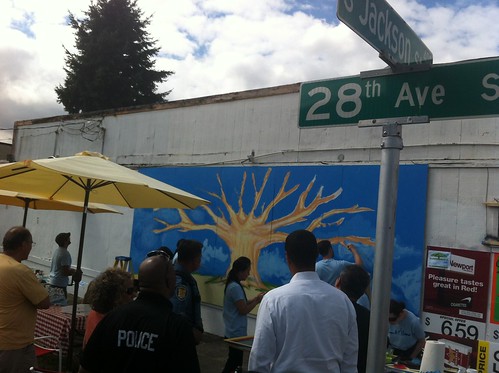 A collaboration among many partner organizations, a new mural at 28th and Jackson on the side of the Jackson Street General Store will celebrate the families of the neighborhood.

Designed by Jake Wagoner (who also designed the recent 22nd and Jackson mural along with Joseph Brooks), the Family Tree mural is a partnership between Urban Artworks, Blast Radius (a global marketing company that provided the volunteer painting work), SPD, the Colman Neighborhood Association and the Central Seattle Drug-Free Communities Coalition (who provided the funding).

The mural will be a tree with framed family photos on its branches. They have so far collected a handful of family photos, but they need about eight or so more. If you want your family photo to be featured, email Urban Artworks’ Stephanie Tschida at [email protected].

The mural will hopefully be completed next Thursday. More details from Tschida:

Entitled, “Family Tree”, the mural will include frames which will be glued to the wall. Within the frames we are installing actual family photos from the community. Families come in many forms: Church families, sports teams, nuclear and blended families.

We have spaces for approximately 8-10 more photos. We have received three wonderful photos so far and want to portray the diversity and history of the area as accurately as possible. We are planning to laminate the photos, and, as this is a very low budget project, are looking for a print shop to donate the enlargements and lamination. Your ideas would be very helpful!

We are very excited about this cool project! Thank you for your support!

In addition to this mural, Wagoner and Brooks are hard at work on several other works in the area, many of which are funded out of their own pockets. They are working on a wall outside Eastlake’s Lo-Fi Performance Gallery and on a the wall of Tea Garden at Rainier and Dearborn. Randy Beaulieu of the Central Seattle Drug-Free Communities Coalition said they have more murals planned, so stay tuned.