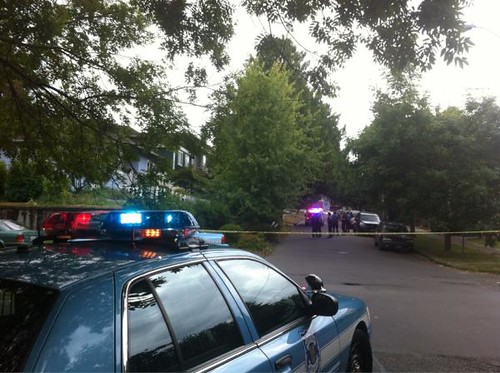 A man was shot in a hail of gunfire Thursday afternoon in another violent gun incident in the area around MLK and E Cherry.

911 callers reported multiple shots in the area near 27th Ave and E Columbia around 4p. Officers arrived to find the wounded man. A witness tells CDN that 10 shots were heard.

Gang units have been called to the scene as the investigation continues.

Here is the preliminary SPD report on the incident:

One man was seriously wounded in a shooting Thursday in the Central District.

Around 4 pm, police received reports of 6-10 shots fired near 27th Avenue and E. Columbia Street, where they found a man who had been struck by gunfire.

The victim was taken to Harborview with life-threatening injuries.

It appears the gunman knew his victim, and police are now searching for the suspect. Gang detectives are assisting in the investigation.

We will update with new information as soon as it’s available.

51 thoughts on “Man shot near MLK/Cherry”