Here is a look at some crime incidents in the neighborhood during the past could weeks, according to police reports.

More details in the shooting of Frank Brown

Frank Brown has been upgraded out of the ICU at Harborview and is now in satisfactory condition after being shot multiple times August 23 at 27th and Cherry, the Seattle Times reports.

According to the police report of the incident, Brown was conscious and alert when officers arrived at the scene and were able to tell them who did it and how it happened. He told police he was arguing with the suspect near the corner of the house when the suspect pulled a 9mm handgun out and unloaded.

I’ve read a lot of police reports, but this one is among the most downright low.

A man who is mostly blind was in bed at his home near MLK and S Irving Street when he heard someone enter his home by removing a window AC unit around 5:30 a.m. August 11. The robber entered his bedroom and stole the jewelry from his body before rummaging through jewelry in his room.

The man could not provide a physical description of the suspect, but police were able to lift some prints from the scene.

More details from the police report: 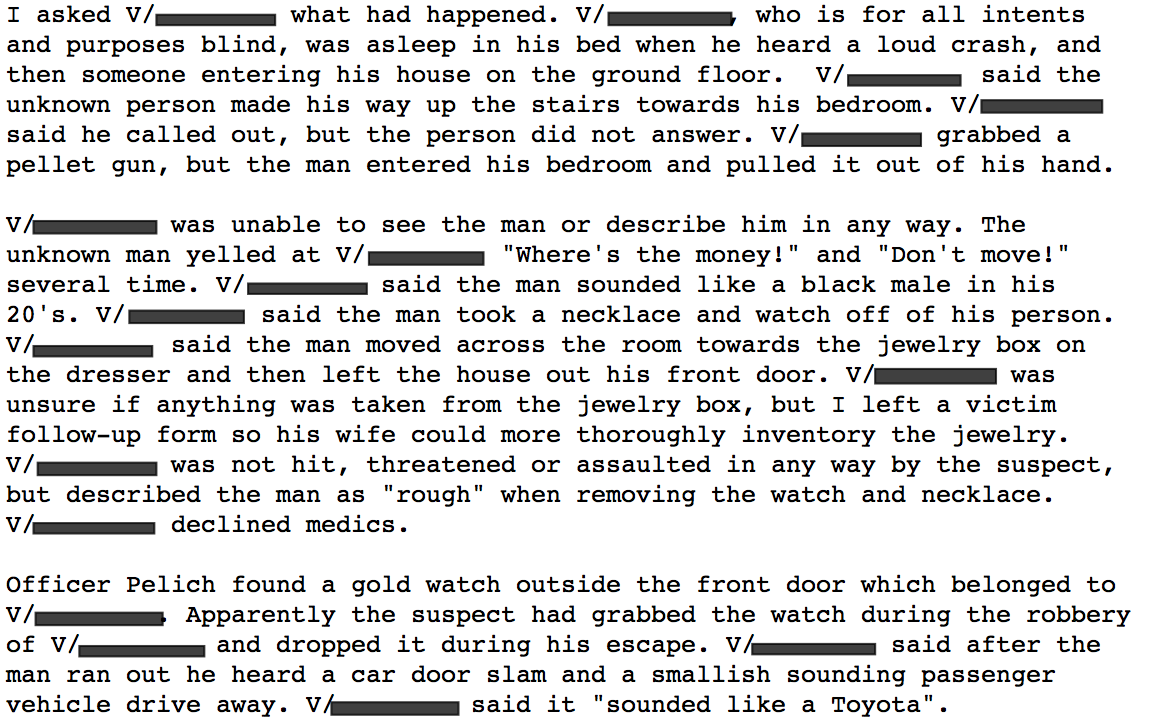 Three young men tried to rob a woman at 18th and Yesler around 3:45 p.m. August 17, but fled unsuccessfully when they saw a witness calling the police. They did break the woman’s necklace, however.

While police were talking to the victim and witness, they saw one of the three men walking nearby. The witness and victim identified him as the lookout, and he was arrested.

A group of people were playing drums in Madrona Park around 6:30 p.m. August 19 to celebrate a friend’s birthday when a man angry about the noise approached them with a 4″ folding knife in his hand. He ran into the park yelling at them, the victims told police. He then stabbed three of the drum heads, making them unplayable.

He fled and was not located.

A man was jumped near 22nd and Union around 1:45 a.m. August 18 by a group of men. When police arrived, he seemed confused and was having trouble with his memory and kept saying things like, “I’m not sure how I got here.” His phone was missing and likely stolen.

He refused medical attention because he said he could not afford the medical bills, but the officer eventually convinced him to accept a free ride in the police cruiser to the ER.

Several witnesses, who did not see the apparent robbery, saw a suspect running and get into a purple t-top El Camino with 24″ rims. The suspect was described as a black male in his mid 20s wearing a white t-shirt and jeans.

3 thoughts on “Crime Roundup: Blind man robbed in his bedroom + Frank Brown out of ICU”