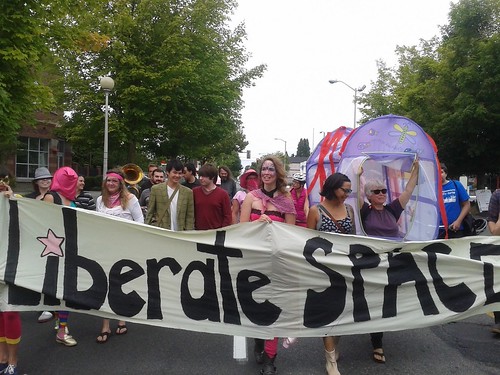 A group of activists took to the streets Sunday to protest a wide array of societal issues. The Carnival of Liberation, as it was dubbed, had close to 150 attendees accepted to attend on Facebook but upon arriving was only met by a small few. As the start time (1:30 p.m.) came and went, only three or four activists were present. Soon after, a troop of ten bicycle cops descended down the Hill from the East Precinct into the Central District. Squad cars and blacked-out Suburbans circled the block as the gathering started to grow.

People in pink dresses, clowns, and people in street clothes began to envelop the concrete corridor outside of Earl’s Cuts and Styles at 23rd and Union.

“We’re here to support everyone and their viewpoints,” said General Malaise with the Clandestine Insurgent Rebel Clown Army, who have become commonplace in many Seattle marches.

By 2:30, about 30 activists had accrued and began taking to the streets, walking southbound on 23rd Ave. One person on a bike bumped a portable stereo while riding in circles around the crowd. The police officers kept a wary one-to-two block distance while following. Traffic delays were minor.

The Clowns whom I spoke with began picking up trash during the march, filling two or so bags. One man began debating with General Malaise that he was contributing to gentrification of the Central District by picking up trash.

The relatively small group drew looks of confusion from passersby, thumbs up from an elderly woman in an old Toyota and cheers when passing a “garage band garage sale” (bands play and sell garage sale stuff, what a concept!). A man on the sidewalk yelled, “Celebrate god, happy birthday,” to a chorus of cheers. The march eventually ended at the former site of anarchist house and community center Autonomia at 24th and Lane.

The group was greeted by a few people clad in masks and a microphone as well as a large table of free food and began an impromptu block party. The speaker talked about how the community center was closed and spoke of a society “without an economy, without capitalism.”

The police, who had so diligently followed the march, backed up and more or less disappeared. A neighbor at this point began arguing with the protestors, who suggested he speak with the cops up the street.

One question that I asked attendees was, “What specific reason are you here for?” The responses I got covered a wide spectrum of societal issues from bringing the community together, protesting social inequality and gentrification. But none indicated a singular issue for the carnival.

While leaving a block away, tucked in the corner of a parking lot was two police Suburbans and a SPD van presumably filled with riot clad officers.

Attendees from the event tell CDNews that everyone dispersed peacefully without any intervention by police (here’s the version of events from anarchist paper Tides of Flame). 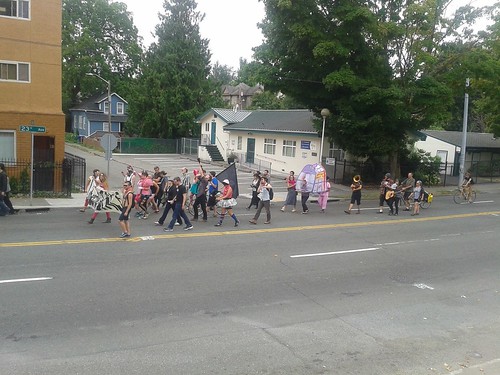 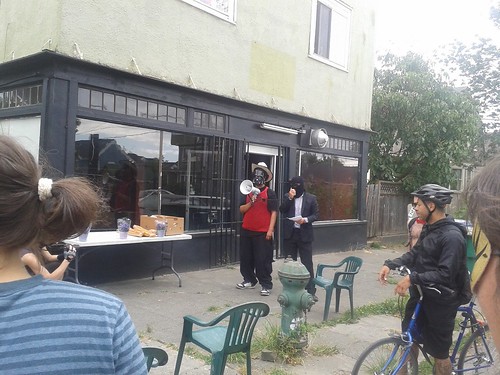