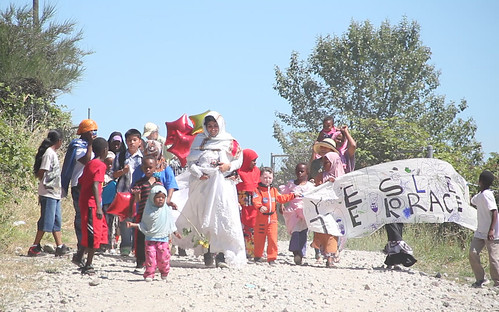 The widow of the demolished warehouse at 10th and Union remarried Saturday, this time to the Yesler Terrace neighborhood.

Babylonia Aivaz interrupted a City Council meeting in early July to announce her engagement. She is protesting the proposed large-scale redevelopment of Yesler Terrace, which is currently awaiting City Council approval.

In order to fund the creation of new subsidized housing units, the Seattle Housing Authority intends to sell some of the land it owns in the neighborhood to private developers. The full redevelopment is anticipated to take 10-20 years.

On Saturday August 4th at 2 pm Babylonia Aivaz, widow of the 10th and Union Warehouse, married the Yesler Terrace Neighborhood. The wedding took place at the scenic Yesler Terrace Farm. The farm which will also be demolished during the re-development empowers many youth from the  neighborhood, delivers organic produce to the community, and serves as an eagle sanctuary.

King County Council Member Larry Gossett was there to show his support for the union between Babylonia Aivaz and Yesler Terrace. Furthermore, his brother Glenn Gossett who was also at the wedding lives in Yesler Terrace  and will be one of 1200 residents forced to re-locate under this re-development plan.

While some have asked if Babylonia is here on the rebound from her brief marriage to the late 10th & Union warehouse, Yesler Terrace was her first love.

Yesler Terrace, Babylonia’s beloved, is under threat through redevelopment.  Although the Seattle Housing Authority and the City of Seattle have promised to provide housing for each family, and to help each family return, the time frame is up to 20 years. In addition, they will sell much of the public land to create upscale apartment buildings, and will change the zoning of the adjacent business area so that developers will build new businesses and more condos for new,wealthier businesspeople and wealthier customers.  This process of gentrification will make it much harder for the same spirit of community to prevail.

The minister asked Babylonia: Do you Babylonia take Yesler Terrace to be your evidence that building community is the only way to shape a healthier future for our country? to be your reminder that loving people is the best way to spend the day? and to ensure that people who do not have a lot of money should have the same rights as those with money?

The Minister then asked the children who were representing Yesler Terrace as the neighborhood is made up of 40% children: Yesler Terrace do you take Babylonia to be your bride and to be your reminder that when an injustice occurs you must stand up for yourselves? The children then released balloons into the air as a sign of their acceptance and proclaimed, “we do!”

This Loraxian matrimony advocates this project not move forward until there is a more efficient and timely return for the residents; that no units can be demolished until there are replacement units built ON SITE. This will significantly decrease the amount of time residents will spend away from their beloved community and their neighborhood.

In the current version of the re-development plan, many residents will have to wait 15-20 years before they can move back to their neighborhood. Who would return on such a timeline?

“Unless someone like you cares a whole awful lot, nothing is going to get better its not”. Residents from Yesler Terrace will be marching to the last public hearing at City Hall regarding the re-development on August 8th @ 5:30 pm. City Hall lifted Babylonia’s year long ban for this particular day, so she will be able to attend as well.

Former mayor Norm Rice and Seattle University President Stephen Sundborg also weighed in on the plans for Yesler Terrace recently. They co-wrote a Seattle Times op-ed that did not call for the halting of redevelopment plans. But they did urge the city and SHA to adhere to these community-created guiding principles:

• First, the housing at Yesler Terrace must be replaced. It is no longer healthful housing for the present residents and will most certainly not stand to serve future generations who will need affordable housing. Social justice — not to mention common sense — requires that the 561 worn-out units be replaced. It’s no longer practical to fix up and patch together solutions to overused housing, water and sewer systems.

• Second, as these obsolete structures are demolished, all must be replaced on the existing site or within a few blocks, and all residents currently living at Yesler Terrace must be given firm rights to return. Seattle Housing has made these promises, and is working in partnership with the city of Seattle to institutionalize them into a binding agreement.

• Third, and of immense importance, Yesler Terrace redevelopment needs to be about more than building new housing — it must be about building a great neighborhood for people of all incomes and backgrounds. The goal is to create a place where the racial and income-based inequities of poverty are eased and people have an opportunity to participate in pathways to education and economic opportunity. 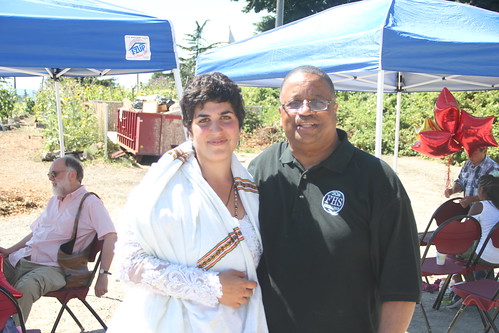 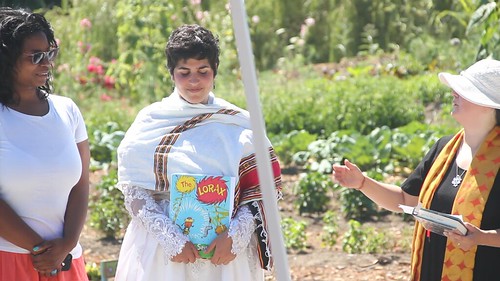