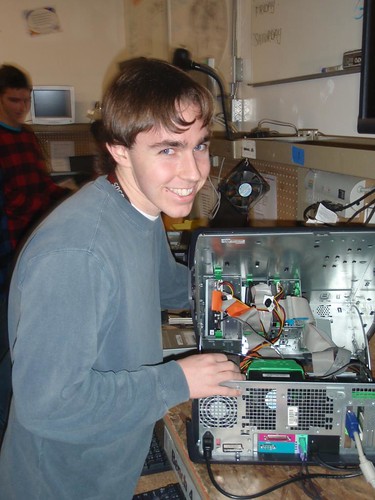 When budget cuts closed Garfield High School’s Global Academy of Technology, Benjamin Huppe and some other students, parents and teachers banded together in 2008 to start the nonprofit Technology Services Corp. In 2009, Huppe started traveling the world with the organization, installing computer labs in underserved areas of the world.

Huppe, a member of the Garfield Class of 2010, died the morning of July 14 when his car veered off the road near the Southworth Ferry Dock.

When Benjamin Huppe was still a sophomore at Seattle’s Garfield High School, he already believed that innovative technologies could save the world. Before his graduation in 2010, he was repairing old computers and setting up computer labs in developing nations.

“He was one of those students every teacher wants to have — curious, patient with himself and with others,” said his former Garfield computer-science teacher, Helene Martin. “He was always looking for opportunities to contribute, even to peers he didn’t know very well.”

Mr. Huppe died Saturday morning when his car veered off Southeast Sedgwick Road near the Southworth ferry dock in Kitsap County. He was 20.

Ben Huppe (1992-2012) was a founding student board member of Technology Services Corps, helping to bring the organization into existence in 2008 and, since then, playing an instrumental role in its evolution. Ben served in a leadership role on three TSC trips – Guatemala (2009), Ecuador (2009), and India (2010) – preparing computers in the US, installing them in school labs in underserved areas, befriending students overseas, and serving as a mentor to countless Garfield High School students also engaged in these and other service technology trips.

Separate from his ‘hands-on’ work with students and computers on these trips, Ben played a huge role in guiding and challenging the TSC board. With both patience and firmness, he set high standards for himself, others, and the organization. He tended to the mission of the organization and tirelessly created opportunities for other Garfield students to participate in and be forever changed, as he had been, by the experience of engaging in international service work.

TSC would not be what it is today without the focus, optimism, diligence and passion of Ben. He will be sorely missed by all and will forever serve as a beacon to those continuing the work of the organization.