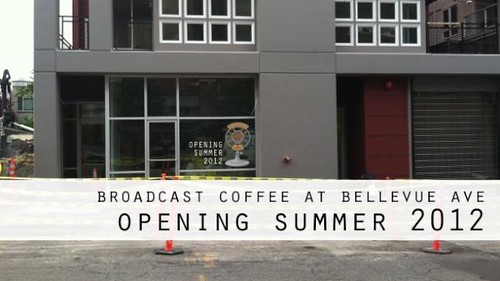 This story was originally published in the weekly food & drink feature at our sister site Capitol Hill Seattle. Less than a year after remodeling and changing the name of the 20th and Yesler coffee shop from Soho Coffee to Broadcast Coffee, the CD-grown company is looking to expand.

Truth is, survival of a Capitol Hill coffee joint is one part quality, one part experience and a big fat chunk of real estate. With a few years of experience under his belt growing his first shop into a popular caffeine dealership at Yesler and 20th in the Central District, Barry Faught is ready to tune his Broadcast Coffee into Capitol Hill.

The second Broadcast outlet is slated to be open in the new mixed-use building on Bellevue Ave — no, not that one — this one — by the beginning of August.

“My focus has been coffee preparation and I feel it has really paid off,” Faught said of his three years in business in the CD.

Faught said he made the decision from the start to focus on serving the best possible coffee and working with the best local providers he could find to do the rest. The plan on Capitol Hill, he says, will be the same.

“I’ve developed a lot with my coffee preparation skills and I feel I’m ready for Capitol Hill,” he said.

Faught is also ready for the education that comes with a first-time buildout. The Bellevue Terrace project is a small building — only 23 residential apartments and a single retail berth at street level. CHS reported that the project was set up to feature a full kitchen hood but it appears that the cafe tenant presented the best option for the developer. That space now is Faught’s to shape as he will and get ready for what he hopes is an area of more growth on the Hill as neighbors move in upstairs and the new building at the corner of Bellevue and Pine takes shape. The shop is also not far from Bauhaus — with a deal in place to be part of the development slated for its block, there still might be some Bauhaus downtime during construction.

While the plan is mostly the same and they’ll continue to offer Stumptown beans, Faught said the new Broadcast look will differ. Paperwork filed with the city lists a modest $20,000 construction budget for the 1,000 square-foot space.