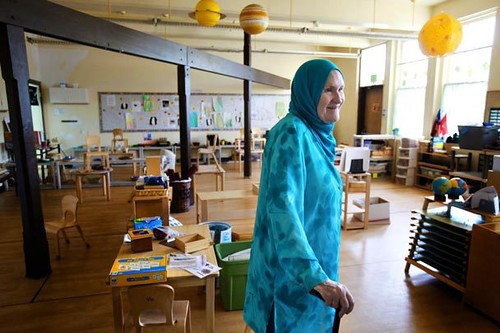 Reminder: The Islamic School is hosting a potluck for anyone who has been a member of the school community today (June 26) from 5:30 – 8:30 p.m. at the 25th and Cherry school.

We reported earlier this month that the school is closing its doors after 32 years due to continually low enrollment. The Seattle Times recently profiled the school and spoke with some former students about their experiences there.

“We worked very hard in making sure they (students) weren’t isolated as Muslims but actively engaged with other religions and other groups of people,” [ISS founding member Ann] El-Moslimany said. For the school, that also meant discussing the history of many religions and ethnicities and not segregating classrooms by gender, as is the norm in some Muslim nations.

Former student Zarbakhtah Kakar, a medical assistant who now lives in Lynnwood, was 8 when she and her family left Afghanistan. When she enrolled at ISS in 1985, she was afraid, remembering stories about Afghan schools that didn’t allow girls and where children were beaten for not doing homework.

“Here, everything was taught through love,” Kakar said. “If you made a mistake it’s OK: ‘How can we help you get back up?’ It was the root of my Islamic education. Without that, I feel like I would’ve lost my roots.”

Like many former students, she sent her own daughter to the school. Yet even as multiple generations of some families filled the classrooms, it wasn’t enough to keep the school going.

The school will also be hosting a community meeting July 10 from 6:30 – 8:30 p.m. to give the neighborhood a chance to have input in the next steps for the school building.

One thought on “Ahead of Tuesday’s potluck, Seattle Times profiles the closing Islamic School”