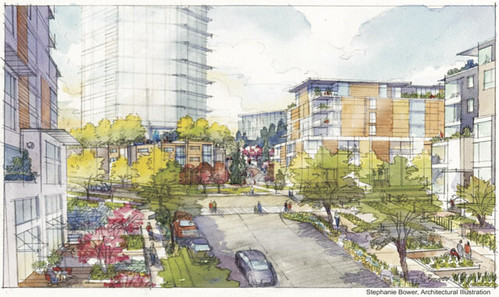 Ambitious plans to redevelop Yesler Terrace are set to go before the City Council this summer as residents and planners prepare for the sweeping changes to the neighborhood.

In order to fund the creation of new subsidized housing units, the Seattle Housing Authority (“SHA”) intends to sell some of the land it owns in the neighborhood to private developers. The full redevelopment is anticipated to take 10-20 years.

The changes will likely mean that Yesler Terrace will shift from being one of the lowest-income neighborhoods in the city to having an affluent majority. Residents will also lose the front yards that adorn the current homes.

One sticky issue with many current residents is fear that they will not be able to return to the neighborhood once they are displaced from their current, aging housing units. The SHA has promised residents that everyone who wants to return will have a unit reserved.

For more background on the plans for the neighborhood and a look at what the unique neighborhood is like today, see our two-part series (part 1, part 2).

Seattle Channel’s City Inside/Out recently spoke to proponents and concerned residents about the plans and the road ahead:

Other big changes are already headed to the neighborhood. The city and Sound Transit have already begun construction on the First Hill Streetcar, which will go through the heart of Yesler Terrace with a stop at the community center at Broadway and Yesler. The streetcar should be operational in early 2014.

Here’s some data on the current make-up of the Yesler Terrace population, presented to the City Council in April: