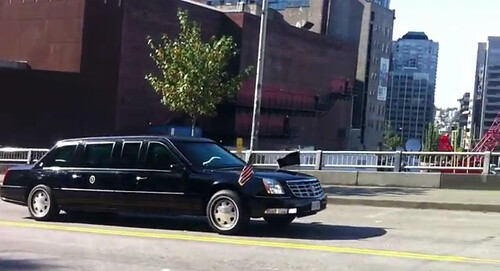 Fresh from endorsing marriage equality and ensuring the same-sex marriage debate will be an even more significant element in the 2012 election, President Barack Obama returns to Seattle on Thursday for a day of fundraising. His stops include a private fundraiser at a Madrona/Denny Blaine home on Lake Washington and another appearance at the Paramount Theater that will likely snarl afternoon traffic.

Obama’s morning destination is the home of Bruce Blume, head of commercial real estate firm The Blume Company. Blume’s Madrona/Denny Blaine waterfront home can be seen in this KING 5 post. Seats at the private fundraiser cost $35,800.

KING 5 reports Obama’s first stop will be a fundraiser at a home in Madrona before an afternoon event at the Paramount Theater that will include a performance by Dave Matthews.

Obama also held an event at the Paramount in his September visit to Seattle.

As reported late last month, the President’s Seattle reelection campaign this year will be based in Jackson Place. That office had its official opening last week.