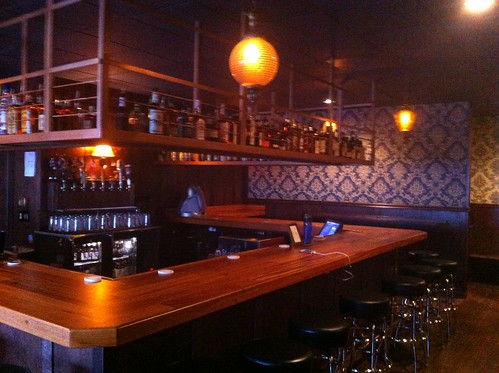 The Neighbor Lady is now open for business, joining Med Mix in breathing new activity in the troubled corner at 23rd and Union.

Owners Stephan Mollmann and Shira Bray — both from Cherry Street’s Twilight Exit, a CDNews advertiser — have been hard at work rehabbing the space that housed Thompson’s Point of View for decades. Thompson’s had a couple difficult years and eventually closed in September due to back taxes.

The Neighbor Lady opened its doors for the first time Sunday evening for a “soft opening.” Now, it is up and running at normal hours (4 p.m. until bar close every day), though it’s possible they will have some late openings for the first week or so.

The bar is themed after several European bars Mollmann visited years ago, and the name comes from a brothel-themed neighborhood bar in Amsterdam. The menu has sultry language (appetizers are labeled “foreplay”), and Mollmann says the joint is still working out its identity.

While the menu is not exclusively vegetarian, it is definitely vegetarian-friendly. The bar also features a games room with pinball machines and video games as well as a pool table.