A five course meal integrated with performances and art, Café Nordo’s Cabinet of Curiosities opens Friday at Washington Hall. As The SunBreak explains, Café Nordo combines theater and food, but it’s not like the dinner theater you’re used to. The food is as much a part of the evening as the art and performances.

But before you start digging through the couch looking for change to buy a ticket, you should know that tickets run $70 on Thursdays and Sundays and $80 Friday and Saturday. But you are getting a unique five-course meal (camembert and morel tort, rabbit confit hidden in shaved fennel, and more) as well as art and a performance. That sounds way more fun than a tank of gas. 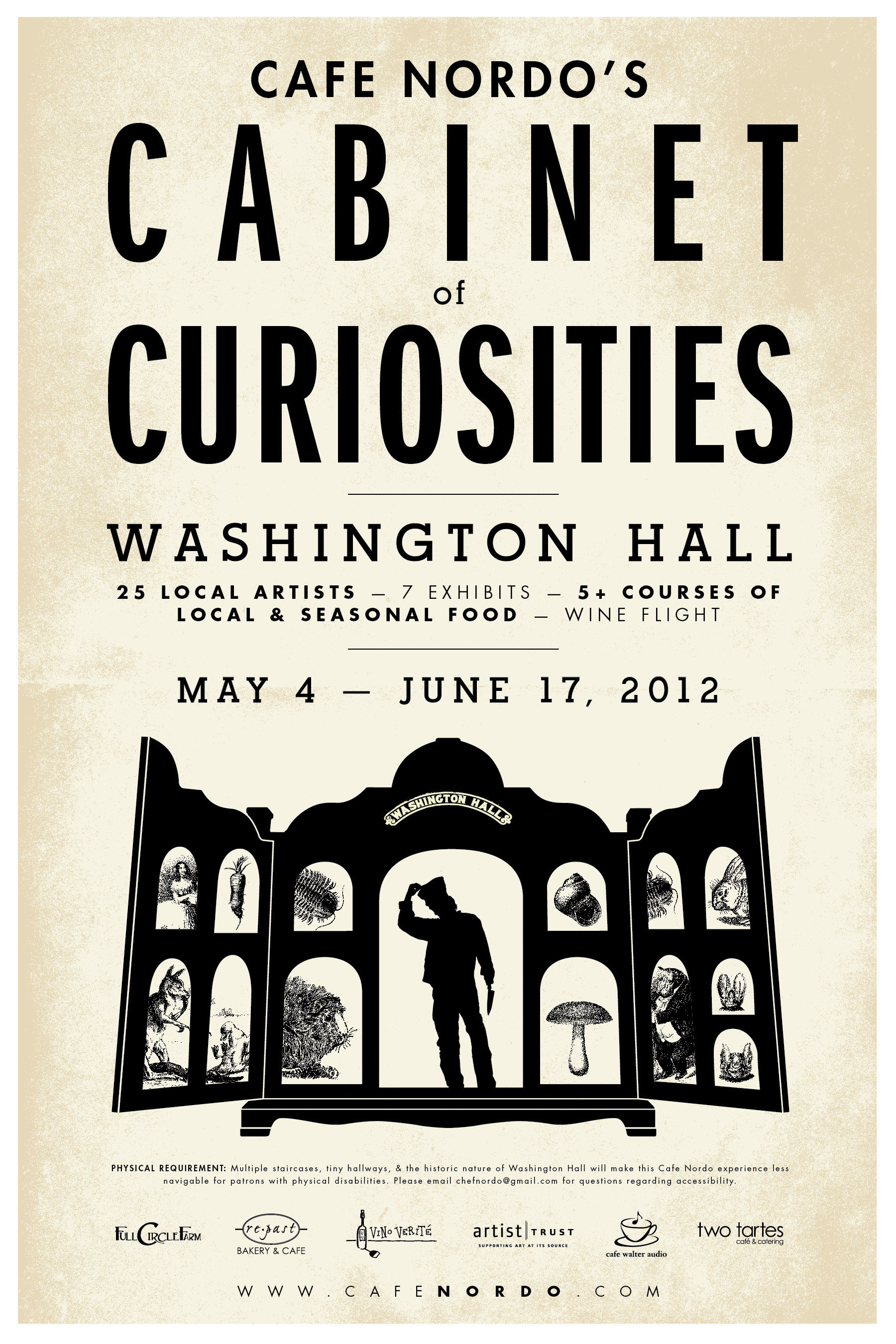 Café Nordo and The World’s Most Elusive Culinary Museum® dish up a selection of wonders in a progressive dinner at Seattle’s historic Washington Hall.
Beginning May 4, the doors of Washington Hall, Seattle’s most pedigreed underground arts space, swing open to reveal Café Nordo’s Cabinet of Curiosities a multi-room private collection of culinary exhibits, some not seen by the public since the early twentieth century. A dish exquisitely crafted by award winning Chef Nordo Lefesczki accompanies each room, enticing adventurers to use all five senses to experience the wonder of food. Flights of wine and originally composed music lace the delirious adventure. Guided by Seattle’s most talented performers, the brave and hungry wend their way through the past and future of Carnal Food®. Only the most seasonal and local interpretations of culinary lore find their way to the plate. Politics aside, Chef Nordo is committed to deliciousness.
Since its first five course foray into food theatre in 2009, Café Nordo has served up two five- course dinner shows, (The Modern American Chicken, and Bounty! An Epic Adventure in Seafood) two cocktail shows, (Sauced, and To Savor Tomorrow,) served a five-course meal in a 30 ft tree house, won critical acclaim (including three Seattle Times Footlight Awards), and established a cult following in Seattle. The dining experience is both theatrical and intimate, only 60 seats available per night with a limited six week engagement.
Café Nordo’s Cabinet of Curiosities is Chef Nordo Lefesczki’s most ambitious five-course meal to date as his production team collaborates with local visual artists to transform Washington Hall. This building, located in the Central District, is a jewel of Seattle’s cultural history, having hosted Billie Holiday, Duke Ellington, Spalding Grey, and Mark Morris. After falling into disrepair, Washington Hall was purchased by Historic Seattle in 2009. The gradual renovations take a pause as Café Nordo utilizes every secret staircase and backroom to exhibit the history of food. With rooms dedicated to Edible Invasive Species, (designed in conjunction with artist Anne Blackburn,) French Culinary History, (designed in conjunction with artist Mark Siano,) Herbal and Medicinal Uses for Food, (designed in conjunction with Seattle Magazine Spotlight Award winner Mandy Greer,) among others, Café Nordo will create the most intimate and expansive use of Washington Hall to date.
Featuring music composition by Annastasia Workman, a script by Terry Podgorski, direction by Erin Brindley, and performances by Aimée Bruneau, Mark Siano, Maximillian Davis, Carter Rodriquez, Opal Peachey, Evan Mosher, and Sachie Mikawa, Café Nordo’s Cabinet of Curiosities will provide a truly transporting five-course dining experience.