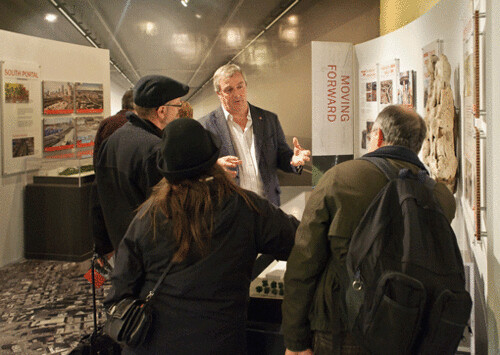 Since opening in December, more than 1,500 people have learned about the future State Route 99 tunnel at Milepost 31, the Washington State Department of Transportation’s new project information center in Pioneer Square. In April the agency will introduce a new Milepost 31 monthly speaker series to give visitors more insight into this massive project.

The first talk, to be held during Pioneer Square’s First Thursday Art Walk, brings leaders of the SR 99 Tunnel Project to the center to discuss its extreme engineering and the changes coming to SODO, the downtown waterfront and neighborhoods near Seattle Center. Guest speakers include Linea Laird, WSDOT administrator for the Alaskan Way Viaduct Replacement Program, and Chris Dixon, project manager for WSDOT’s tunnel contractor – Seattle Tunnel Partners.

Don’t miss this opportunity to learn exciting details about the SR 99 tunnel. And, after our event, be sure to leave yourself enough time to explore the rest of the First Thursday Art Walk.

Save the date for the next installments in our speaker series:

May 3: Tunneling in Seattle – A History of Innovation

Did you know there are more than 100 tunnels beneath Seattle? Join us for a virtual tour exploring tunnels built during the past century and learn how tunneling technology has advanced.

What’s as long as a ferry, five stories tall and weighs 5,500 tons? The SR 99 tunnel boring machine! We’ll show you how this custom-designed machine will grind through the ground as it builds the SR 99 tunnel beneath downtown.