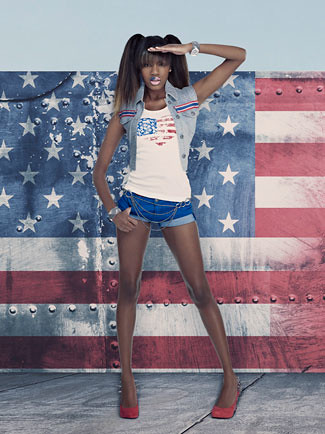 If you were guiltily watching America’s Next Top Model, hoping nobody would walk in the room and catch you weeping with Tyra, you now have a legitimate excuse. Central District native Ebonee Davis is one of the models going through the emotional ringer on this season of the show, which broadcasts Wednesdays at 9 on the CW.

Seattle Met chatted with Ebonee (spelled Eboni on the show). From Seattle Met:

Ebonee Davis (Tyra and company have her has Eboni—not sure what’s up with that) is a local talent with Seattle Models Guild and one of 14 girls submitting to Tyra rants and reality show editors in an effort to boost their careers.

I chatted with the Central District native yesterday and asked her if, at the onset of the show’s taping, she wasn’t a little dubious about prior top models and their post-show track records. My point being: We haven’t actually seen any ANTM stars catapult on to Chanel runways or Vogue pages.

‘They didn’t have modeling experience or the background to fall back on,’ said Davis of the show’s past-season where-are-they-now candidates. ‘They don’t see that the experience of the show isn’t correlated to the real world of fashion modeling. I was modeling before the show, I already had career before I went on the show,’ she continued, relating that she feels prepared to use the irreality to further what she’s already got going on (clients in Miami, at Nordstrom, and local shoots with our friends at Jenesequa).