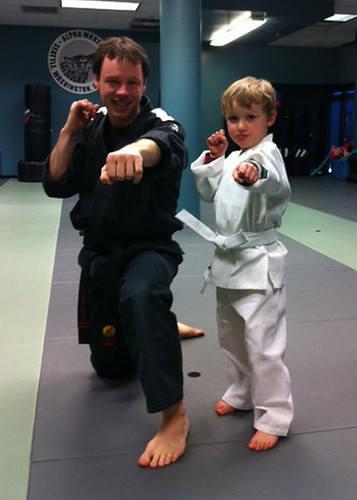 Traveling along Madison in the late afternoons and evenings, you may have noticed new activity in some of the storefronts – specifically, some jabbing, kicking, punching, and bowing. Alpha Martial Arts moved their second school to 1912 E Madison at the start of 2012.

This branch of Alpha Martial Arts started offering American Kempo Karate, kickboxing and Jiu-Jitsu classes two years ago, sharing space with the Aikido Seattle dojo at 23rd Avenue and E Turner, near Aloha. Silas Ness, head instructor at the new location, said that sharing space with the Aikido school allowed Alpha Martial Arts to build their student base and assess the demand for a dojo like theirs in the Capitol Hill and Central District area. Holding classes at the Aikido school two days a week, then growing to four, Mr. Ness also reached out into the community, teaching classes at Miller and Montlake Community Centers. Before long AMA had too many students to accommodate in the shared Aikido dojo, and it was time for Alpha Martial Arts to open their second school.

The spacious new location, just east of Trader Joe’s on Madison, offers classes Mondays through Thursdays. Classes for young children run 30 minutes long and are held twice a week. Ness, who began teaching martial arts in 2005, said this is because of the typical short attention span of 4-7 year olds. While one hour long class could dissolve into “chaos,” he said that two, 30 minute classes give the kids the same amount of instruction time, but it is much more productive because the children can stay engaged and hold their focus for those shorter classes without getting too overwhelmed or overtired. Shorter classes for little ones keep the focus where it should be – on having fun!

Teen and adult classes run 45 minutes to an hour long. In particular, the adult kickboxing classes are designed around fitness and a work out, whereas the karate, Krav Maga and Jiu-Jitsu classes focus on developing the students into martial artists.

All karate students have the opportunity to test for belts on a quarterly schedule and both Alpha Martial Arts school locations gather for belt ceremonies three times a year.

The school’s original location — in Bryant near University Village — is run by Master Instructor Chris Herrman, who founded AMA in 2001. AMA instructors put a lot of emphasis on the relationship between martial arts and an individual’s interactions with the outside world and treatment of others. Their website lists, “courtesy, friendship, responsibility, integrity, courage, perseverance, fitness and respect,” as the characteristics they strive to help build in their students.

To emphasize this connection, AMA focuses on a “Word of the Month” and instructors write about it on the school’s blog. February’s word was “Loyalty,” and even the youngest students talked about what it meant to be loyal to their friends, families, and themselves. Optional homework for children gives the students an opportunity to discuss these values at home with their families, and students earn stars to put on their uniform for completing homework assignments.

Classes are still open for enrollment, and special introduction lessons for new students are held by appointment Mondays through Thursdays. Please call 206-322-1433 or fill out their online contact form to learn more.