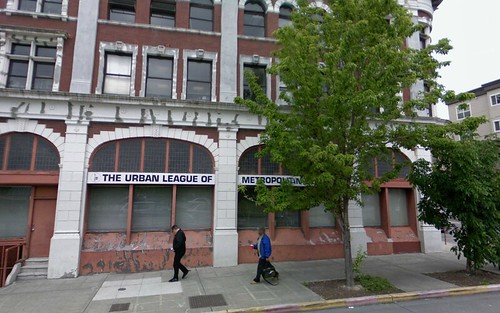 The Urban League of Metropolitan Seattle has sold its historic headquarters building at 14th and Yesler in hopes of pulling itself out of recent financial and legal troubles. A couple local business owners purchased the 101-year-old building for $2.7 million in a deal that closed Friday, the Seattle Times reports.

The ULMS has had a rough couple years as the recession and the 2011 Seattle Public Schools scandal led the organization to acquire debt and forced it to fire employees.

The league’s financial health was hurt by a drop in government funding and fallout from last year’s Seattle Public Schools scandal. State auditors found that the schools might have wasted money in trying to help minority firms get school-construction work. The biggest questionable expense, the audit concluded, was nearly $600,000 to the Urban League to pay for minority-business outreach and training.

Shortly after the audit, the league’s board closed its contractor center. It also laid off employees — as staff shrank from 40 employees to a handful — and acting CEO Tony Benjamin stepped down. Benjamin had blamed “negative publicity” from the schools scandal for damaging the league’s reputation and its ability to renew some contracts.

The ULMS maintains that it did nothing wrong during the scandal, which led to the arrest of Silas Potter. But regardless of guilt, the organization has been diminished by the events.

The new owners are Craig Dawson and Walt Townes, local business partners. Dawson owns business document management company Retail Lockbox, which is moving from South Lake Union to their new larger space in the 14th and Yesler building. Dawson told the Times that, while he likes to help the League out, purchasing the building is mostly a business decision.

The sale included a three-year lease to the ULMS to continue operating out of the building.

The ULMS is putting the money raised from the building’s sale to reinvigorate their search for a new CEO and reform its bruised reputation. The national Urban League has stated it is committed to rebuilding the Seattle chapter, and Interim ULMS Chairman Walle Ralkowsi told the Seattle Medium they are determined to return to fighting for equality.

According to ULMS, The sale the building is expected to bring about a resolution of the financial obligations which were left after many of the Urban League’s programs were downsized last year due to the poor economy.

“There are so many people who are waiting for us to re-emerge as the Urban League they want to see thriving here, that many people have offered us a chance to build a financial base we will need to make us one of the key local agencies fighting for equality and finding opportunities in education, housing, employment and health,” said Walle Ralkowski, Interim ULMS Chairman.