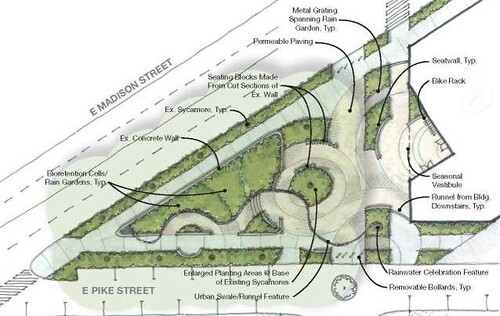 The small triangle park at 15th and Madison is getting an overhaul, and the final public input meeting is scheduled for January 9 at Seattle Academy. The park is across 15th Ave E from the under-construction Bullitt Center.

Our sister site Capitol Hill Seattle reports that the park is underutilized as it is currently designed:

Despite some concerns that the park is being redesigned as an extension of the Bullitt Center’s ambitious project, representatives were optimistic about the park’s overhaul at this summer’s center groundbreaking. CHS documented some of those concerns and other details from a Seattle U study of the park that found only 4 out of 1,400 people observed near the park actually lying or sitting in the public green space along busy Madison in 2010.

More details on the meeting, from Seattle Parks:

Seattle Parks and Recreation invites the community to participate in the final design meeting for the community initiated McGilvra Place Park project on Monday, January 9, 2012 at 6 p.m. at Seattle Academy, 1432 15th Ave.

This project provides for a more accessible and usable site, which demonstrates alternative green construction methods and reviews the possibility of a pedestrian oriented street at 15th Avenue between East Madison and East Pike streets. The project site is located at the intersection of East Madison Street, East Pike Street, and 15th Avenue.

This project is one of 15 projects to receive funding through the first round of the Parks and Green Spaces Levy Opportunity Fund. The Opportunity Fund provides $15 million in funding for community initiated park development or property acquisition projects.