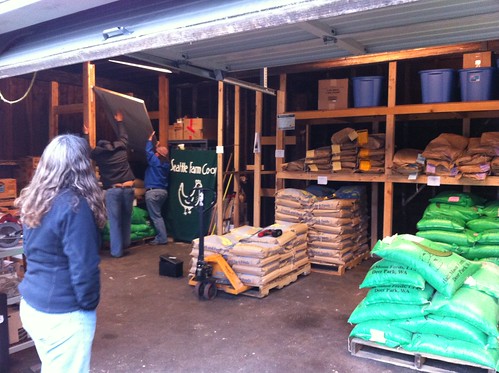 If you are one of the many CD urban farmers, finding worms and wholesale feed just got a little closer. Seattle Farm Co-op — a member-owned urban farm co-op — has moved-in at 18th and Jackson.

The co-op moved from SODO, where game day crowds made it difficult to operate many days. Now the volunteer-run co-op shares a space with Cascadian Edible Landscapes, Amaranth Urban Farms and a bio fuels co-op. They plan to be open 3-4 days each week, depending on volunteer schedules. A calendar of open hours is posted on the SFC website.

Aside from selling all local and organic feed and supplies for raising chickens, goats and rabbits, the co-op hosts skill sharing classes and a big spring plant start exchange. Past classes have included topics like chicken slaughtering, canning, cheese making and raising goats. The co-op also hopes to develop a tool library for gardening items.

You do not need to be a co-op member in order to buy from SFC, but members get discounts and other deals. It costs $50 to join, and you can also volunteer to offset some of the cost. And they could use all kinds of help, from accounting to website design to people who want to teach skill share classes or help with promotion events. And, of course, they need help staffing the co-op to keep the doors open.

The co-op started in February 2009 in co-founder and board member Amy Stevenson’s back yard in Fremont. But Stevenson does not like to take credit for starting it.

“I just had the idea and sent out an email,” she said. A group got together and determined they needed to pool their resources in order to buy a ton of grain (literally) to get it wholesale. So they did just that and had it delivered to Stevenson’s back yard. They later moved to Georgetown, then to SODO. They arrived in the Central District December 3.

“The co-op supplies the whole city, so we want to stay central,” said Stevenson. When they first started, the majority of members were based north of the ship canal, she said. But now that they have been in south and central Seattle for a while, the geographic disbursement of members has evened out.

The co-op plans to have a grand opening soon, as well as getting a bigger sign. But even with just a tiny sign in the window, they have had many people stop by to support them, said Stevenson.

“It’s been very warming. It feels good,” she said.