Three men were arrested in a nighttime raid of a house at 19th and Spruce December 23 after neighbors told police people were squatting in the under-renovation house.

Occupy Seattle got word of the eviction out, and several people showed up to protest.

@ThatGirlKatt was there and tweeted photos from the scene: 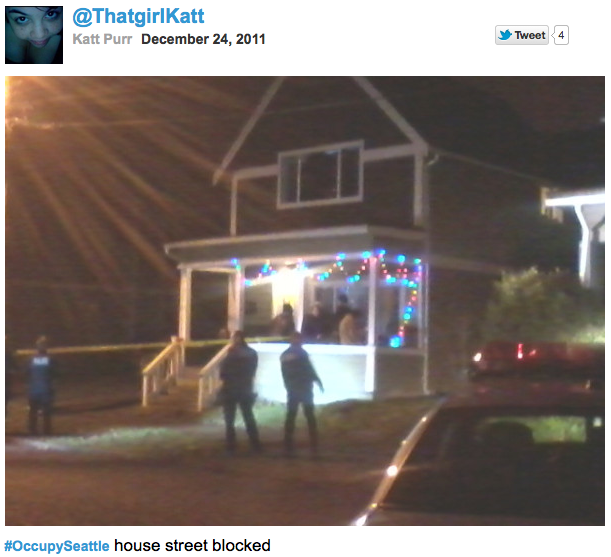 SPD says they first got reports of the occupants December 23, but a CDN community post from December 21 suggests several people (and a dog) have been living there since December 12.

According to King County records, Mountaincrest Credit Union purchased the house out of foreclosure August 28 the home is owned by William and Katherine Brown.

Here’s SPD’s take on the raid:

In the afternoon hours of December 23rd witnesses called 911 to report multiple male and female subjects who had unlawfully entered and occupied a residence under renovation in the 1900 block of East Spruce Street.  Nobody was currently living in the house and the witnesses knew that the subjects occupying the residence did not to live there.

Officers arrived on scene and broadcast over their public address system for the subjects inside the house to come out.  After the third public broadcast by officers was ignored, officers made entry into the residence and discovered two adult male suspects inside who had no legal right to be there.  Another male suspect was attempting to enter the house when contacted by officers.

Preliminary investigation indicates that the suspects entered the house and subsequently damaged the interior of the house with graffiti.  They also left garbage, open containers of food, and were cooking inside the house on a portable, gas-operated stove.

Officers took all three adult male suspects into custody for charges including Criminal Trespassing, Property Damage and weapons violations.  Other criminal charges may be forthcoming.

All three suspects will be booked into the King County Jail.

Squatting has become more and more common (or more conspicuous) as part of the Occupy movement. An unfinished duplex at 23rd and Alder has been occupied by a collective of people since mid November. That group of unnamed defendants have been summoned to court for eviction. The court date has been set for December 28.