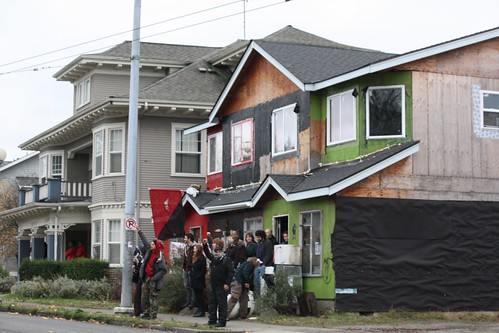 The people occupying the unfinished duplex at 23rd and Alder will have their day in court December 28. Attorneys for the property owner have filed for an eviction court order to remove the members of the Turritopsis Nutricula collective, who have been living in the building for over a month.

According to an email from the Seattle Department of Planning and Development (DPD) to people who had filed complaints, the building owner’s representatives “had sought to have the occupants removed as trespassers but the Seattle Police Department took the position that a court order would be required to remove the occupants.” DPD then gave both the occupiers and the building owners an “Emergency Order to Vacate” due to unapproved electrical work and the lack of water service. They set the deadline for vacating as December 16 at 5 p.m., but the occupiers defied the order. That order does not authorize physically removing the occupants.

As you know, the house at 23rd and Alder is still very much occupied.  I wanted to give you a couple of updates on what has been happening behind the scenes.

Meanwhile, last week DPD issued an Emergency Order to Vacate the building, the emergency conditions being the unapproved electrical work and the lack of water service.  The order was issued to both the owner and the occupants.  The occupants did not honor the deadline in this order (Friday 12/16 at 5 p.m.).  Noncompliance with the order does not authorize physical removal of the occupants, though it does give the property owner added incentive to resolve the issues at the property to avoid potential fines, and it puts the occupants on notice that the building they are in is not approved for residential use.

At this point it appears the owner is doing everything possible to resolve this situation.  The court date is a week from tomorrow (the earliest date they were able to get) and if the requested relief is granted, that will include authorization for law enforcement to take action to remove the occupants of the building.

In order to reoccupy the building as a residence or residences, the owner would have to demonstrate that the building is up to code standards.

This has been a long and frustrating haul but we are hopeful that the end is in sight.  We appreciate your patience as well as the additional information some of you have provided.  Please feel free to contact me, Housing Zoning Inspector Kevin Hou (615-1613), or Inspector Supervisor Clay Thompson (684-7794) if you have questions or concerns.  Of course, if you observe any criminal behavior at the site, you should call 9-1-1.

The occupiers, many of whom are associated with Occupy Seattle, say they are there to live, be part of the community and protest vacant housing. Their official media statement is:

There are homeless people. There are empty houses. That makes no sense.

Since moving in November 19, residents have painted the unfinished exterior of the house black, green and red, and an anarchist flag hangs in front.

Renovations on the building began in 2008, but stopped abruptly amid the financial crisis. It had been uninhabited until the collective moved in. Court documents officially recognize the owner as 307309 23RD LLC, though a man named Denmark West has also been identified as the building owner. Attempts by CDN to contact Mr. West and his representatives have so far been unsuccessful.

Meanwhile, a post on the Puget Sound Anarchist website by “one irregular resident” of the collective gives a take on the occupation and others elsewhere in the region, from Bellevue to White Center. The anonymous poster also discusses recent graffiti in the neighborhood, including the “Gentrification Kills” tag on the fence of “an ugly cubist-fascist-brutalist style house” at 19th and Jefferson.

Here’s the court document summoning the “John Doe and Jane Doe Occupants” of the house: