Carla Saulter (AKA Bus Chick, also with Transportation Choices Coalition, though she is doing this as a private citizen) has started an online petition arguing against proposed cuts to off-peak service on Metro’s Route 27 between downtown and Colman Park.

The planned 2012 revision would change the route so that it only runs between downtown and 12th Ave except during peak hours. The route runs most of the length of Yesler Way, and proposed cuts to both the 4 and 27 could mean no off-peak bus service from downtown to commercial destinations along much of Yesler as well as public destinations, such as Douglass-Truth Library and Leschi and Colman Parks.

Here’s a map of the proposed change from King County Metro: 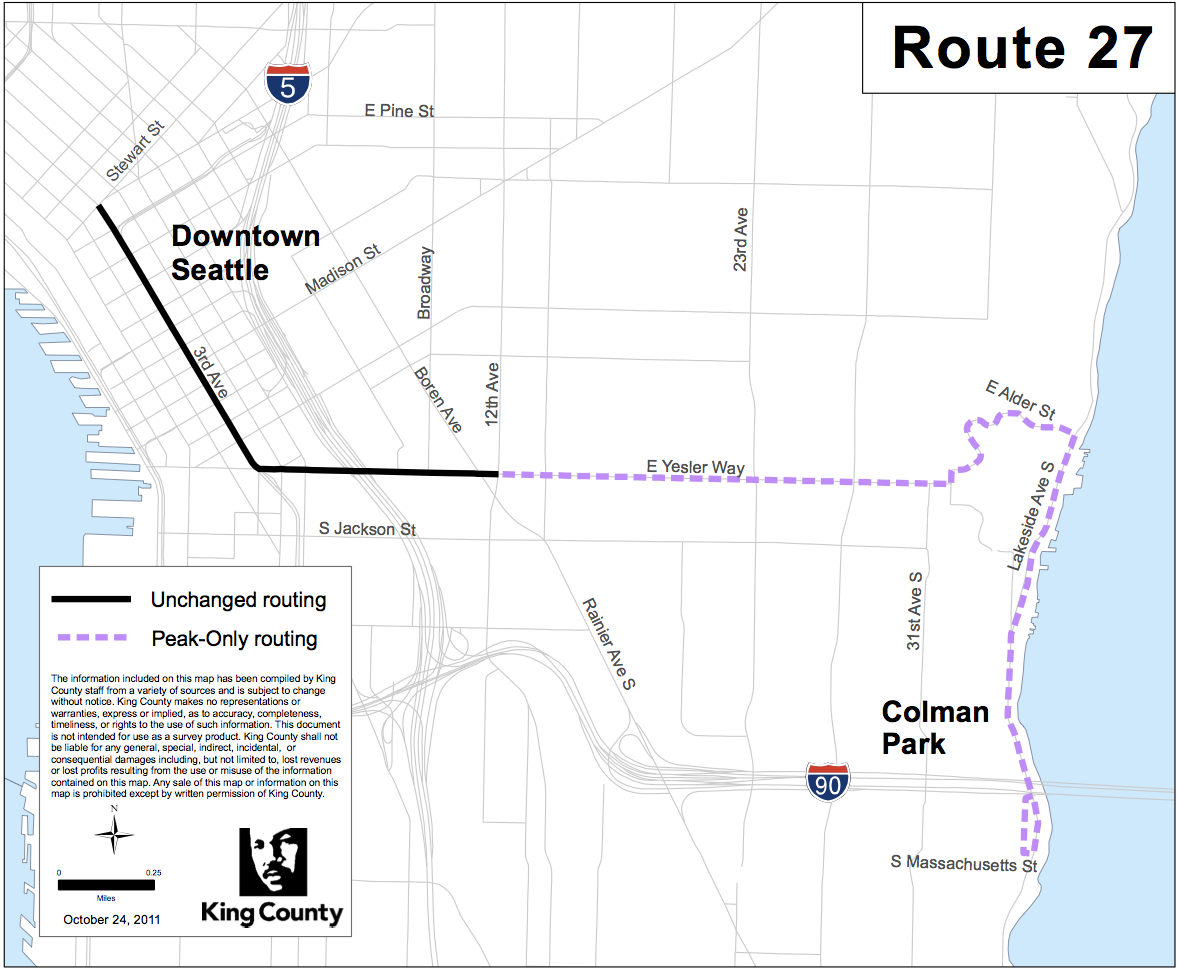 The petition says that the route should at least go as far as Leschi Elementary (Yesler and 31st) for all-day service. Ridership pattern analysis by Bruce Nourish at Seattle Transit Blog shows that, while the 27 is very peak-oriented, ridership is fairly strong to about 23rd Ave. Nourish also notes that the bus does run parallel to the stronger Route 14 just a few blocks south on Jackson.

Here’s the text of the petition:

Metro proposes to eliminate 27 service to Leschi during off-peak hours, terminating the route at 12th Ave. The rationale is that “service to Leschi Park and Colman Park do not meet Metro’s guidelines for continued service,” but this does not explain why the route is being terminated at 12th instead of at 23rd or Martin Luther King, which are common destinations for 27 riders at all hours. If route 4 is eliminated as proposed, there will no longer be a direct link from downtown to Douglass-Truth Library, and there will be no public bus service to Leschi Elementary. (Some other public resources that will be harder to reach by bus: Odessa Brown and Carolyn Downs medical clinics, Catholic Community Services, and Langston Hughes Cultural Arts Center.)

In addition, if the proposed changes take effect, there will be no transit access to the Colman Park area of Lake Washington, another significant public resource, for anyone who does not drive an autombile.

We, the undersigned, do not support King County Metro’s proposed changes to the route 27. All-day and weekend service must be retained at least as far east as Leschi Elementary.