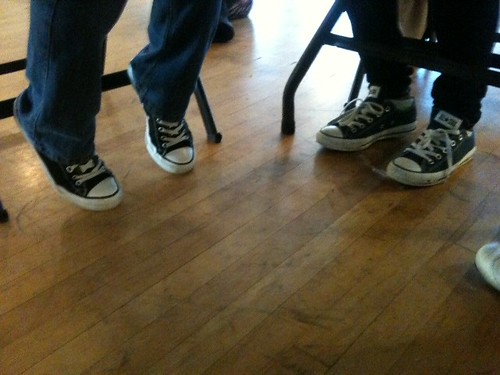 Freehold Theatre Lab/Studio is excited to announce two FREE performances by youth entitled “We Are Tomorrow’s Today” with the Detention All-Stars at Washington Hall on December 10 as part of Freehold’s Engaged Theatre Program.  This performance is the culmination of a residency funded through a Seattle Youth Violence Prevention Initiative Grant targeting you involved in or at risk of involvement in violence. Janet, one of our residency students who will be performing on December 10 told us that for her “Being on stage is freedom of speech, being brave and being humble…all eyes on me. It takes time and dedication for me to be on stage in front of all you. It is my time and I will get a point across.

For over two months, 5 teenagers from different areas of Seattle have been working alongside Freehold Teaching Artists Daemond Arrindell and Carter Rodriquez, and have opened themselves up in ways they never have before. Through writing exercises they have created over 70 pages of text – all their own words. The movement and performance exercises they have been led through have helped to breathe possibility and even more meaning into their words both as individuals and as a collective. The performance will be a mixture of poetry, theater, and music in both solo and ensemble pieces.  The cast includes students from Washington Middle School, Chief Sealth, Rainier Beach and Garfield High Schools.

The value of this work is profound. Program participants, often guarded at first, come alive to participate, collaborate, and trust their individual contributions, discovering the power of their unique voice and the depth of their imagination. With Engaged Theatre, the act of creating dialogue through drama is truly transformational for both audience and artist. The impact is undeniable. Social service providers tell us they are amazed at the changes they see in individuals who participate in the Engaged Theatre program. We consistently see and hear how participants and audience members develop tools of greater empathy to transcend their judgments and assumptions, engaging in a new level of understanding.

Teaching Artist Daemond Arrindell noted the importance of this work when he said:

“These 5 amazing young people have given themselves over to us blindly, not knowing what they were really getting themselves into, but knowing that they would have an opportunity to perform in front of others and to have their very own words be the focus. The courage they have shown in allowing themselves to be so vulnerable is astounding. And the trust they have shown not just the facilitators but also to each other and to themselves is awe-inspiring – a testament to their character.  It is not a rare thing to see young people perform. But it IS rare to see them performing their OWN words. And in this case, poetry says things that they would not be able to say otherwise because of the immensity or complexity of their experience. But through metaphor and allegory and persona, the youth have been able to tackle the incredibly difficult question, “Who are you, really?”, a question that is essential to growing up and one that should be asked at many junctures in our lives. It is this self-examination that the youth in this show undergo in very poignant, powerful and at times, painful but always honest ways.”

The hour-long performance includes a Question and Answer session with the performers and the teaching artists facilitating the program. These performances are a unique opportunity for the youth to share their stories and for the community to recognize their voices.  We look forward to sharing this memorable event with our community.

Public performances of “We Are Tomorrow’s Today” with the Detention All-Stars, an original performance by youth:

Mr. Arrindell is the 5-time coach of the Seattle National Poetry Slam Team, currently ranked 6th in the nation. He is a workshop facilitator, community organizer, advocate and poet. He is also Slam Master of Seattle and producer of the longest running weekly show in Seattle – the Seattle Poetry Slam. He was nominated in 2008 for Poet Populist of the City of Seattle. He is an Associate Partner at Freehold, teaches Spoken Word and Performance Poetry at Freehold, and is a teaching artist for Freehold’s Engaged Theatre residencies at Monroe Correctional Facility and Echo Glen Juvenile Detention. Daemond Arrindell is a resident of Beacon Hill.

Mr. Rodriquez is an actor, musician, and visual artist based in Seattle. He has performed with Book-It Repertory Theatre, Capitol Hill Arts Center, Seattle Shakespeare Company, The New Amerikan Theatre, Edge Theatre Ensemble, and The Community Theatre. He was an actor in the 2009 Engaged Theatre tour of Shakespeare’s Othello. Carter is a teaching artist for Freehold’s Engaged Theatre residencies at Monroe Correctional Facility and Echo Glen Juvenile Detention. Carter Rodriquez is a resident of the Central District.

Eight years ago, recognizing an opportunity to connect more deeply with our community, Robin Lynn Smith created the Engaged Theatre program. This innovative and unrivaled program engages our community through theatre.

The work of Engaged Theatre calls on us to be more courageous and honest in our art. Making our work radically accessible poses certain artistic challenges that result in the expansion of the traditional boundaries of performance and practice. We believe that theatre has a more lasting impact when artist and audience come together to share a new experience; great stories can be the catalyst for generating meaningful inquiry around life’s largest issues, and we encourage engagement and discourse at every level. This philosophy extends out into the world around us as we seek to build authentic relationships through active involvement. For example, the Engaged Theatre program connects Freehold to a variety of communities, including Harborview Trauma Center, Washington Correctional Center for Women, and Echo Glen Children’s Center.  In addition to a summer tour of a Shakespeare production which we tour to our unique partner organizations, we also have run theatre residency programs at Washington Corrections Center for Women for seven years, Monroe Correctional Facility for four years, and Echo Glen Children’s Center for two years. Our residency programs are led by professional artists, and culminate in a public performance in which participants are able to share their work. In each residency an original script is written and performed by the participants.

Since 1991, Freehold has been a highly acclaimed center for the practice of theatre. Our Studio provides a place for actors, from inspired novices to working professionals, to train. Freehold engages an exclusive faculty of independent professional artists. Our Theatre Lab provides a forum for mature artists to research and develop new work and to re-interpret classics.