After a series of public meetings, the preferred design for Jimi Hendrix Park will be revealed December 1. The public design meeting will be a chance for the community to see the design and to give input about which parts of the plan should be prioritized.

The meeting will start at 6:30 p.m. at the Northwest African American Museum (2300 S Massachusetts St), next door to the park.

From above, the design looks a bit like a guitar, and the “body” is made up of a small gathering space that can be used for performances.

In other Jimi news, Rolling Stone recently named Hendrix the greatest guitarist of all time. And lets be honest, who wants to hang out in Eric Clapton Park? 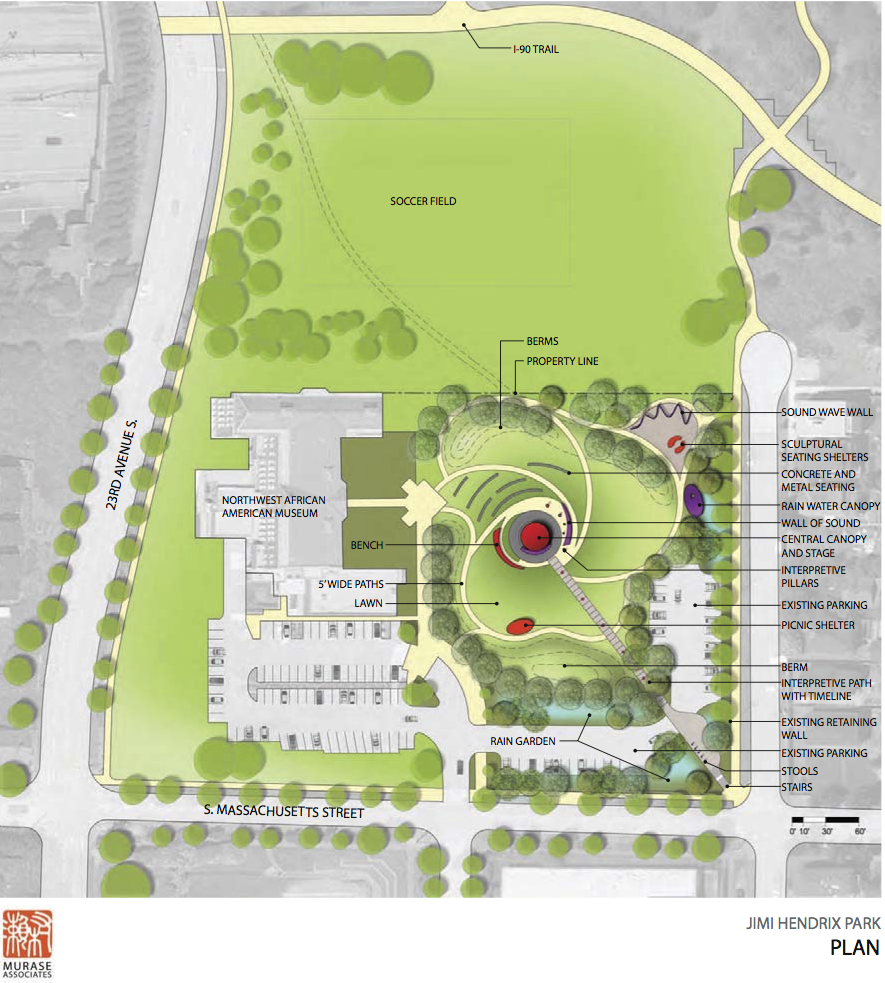 In plan view, the concept takes in the form of a guitar, with the fret of the guitar leading down to the southeasterly (Mt. Rainier direction) of the site. The southeast corner retaining wall will be cut down and a staircase brought through, to provide better connections to the community. The stem of the guitar is an opportunity for specialized paving, incorporating a time line of Jimi Hendrix’s life. At the terminus of the timeline, there will be internally lit columns that also can have cut outs with rich Jimi Hendrix imagery.

Taking advantage of the existing topography, we are proposing sculpting the land a bit more to provide higher vantage points, particularly at the north end. Integrated into the north hill, there will be concrete radial benches which can incorporate interpretive elements, like imagery of Jimi Hendrix, his artwork, impressions of his notable clothing patterns, or handwritten lyrics. The creation of a slight bowl to the center will focus on a central space that can be used for classroom gatherings, picnics, or performances. NAAM regularly takes children out to the park for lunch, and this could contribute to the fun and education during their lunch gatherings. One feature of the heart of the park is a “wall of sound”, a colorful curved wall, imitating the curves of the side of a guitar, curving around to form a backdrop to the center gathering space. This wall can incorporate openings of colored glass, images, and sound, with the use of speakers or an amp. Any sound elements would be moderated with a maximum volume and would be connected to a controller so that they would be off during park close hours. Electrical service would also be provided for the occasional larger event. A shelter over the central space could be curved painted steel, with a form to take on the feel of a “Little Wing”.

Additional shelter spaces will be provided throughout the site, 5’ wide concrete paths radiate from the site, in a spiral fashion, to other spaces. At the south end, we propose a small picnic area with a shelter somewhat smaller than the central shelter, with a similar curved “little wing” canopy. At the east end of the site, we are proposing a similar canopy, but with an opening for the rain to be funneled into a source piece for the beginning of a rain garden.

To the northeast, custom sculptural seating shelters, inspired by artwork that Jimi did while at Garfield High School, will provide intimate seating opportunities, and an icon to the park. Celebrating sound waves, we’re proposing a curved colored steel wall with cut outs of notable figures of Jimi Hendrix performing. As the sun passes over the wall, people can walk past his long shadows.

At the north end of the site, we are proposing clusters of purple flowering Pawlonia trees to provide a “purple haze” in the spring. For the most part, the planting would remain turf grass, flexible and easy to maintain. There will be additional shade trees of different varieties to provide seasonal change, and a rain garden at the south, low parts of the site. The central part of the site may need subsurface drainage, which can tie into these rain gardens for a slower release. A new, lower fence will replace the existing one, and portions of the base of the wall will be planted in Boston ivy to cover the existing retaining wall in green. The weep holes from the existing wall will provide enough irrigation to the vines.