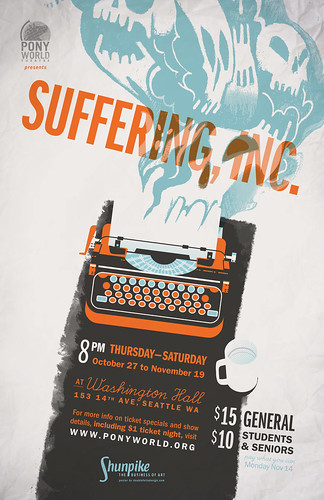 What does a 19th Century Russian writer know about contemporary American office culture? A lot, apparently.

Pony World‘s production of new work “Suffering, Inc” wraps up its run at Washington Hall this week, with a final three performances Novemeber 17-19. The show starts at 8 p.m. Tickets are available online.

The production attempts to take Anton Chekhov’s works, full of “heartache, dissatisfaction, bitterness, and money troubles,” and put them inside a cubicle.

From The Seattle Times’ Misha Berson:

The piece raids Chekhov’s oeuvre to cobble together a script with lines of dialogue from seven of his one-act and full-length plays.

Imagine a sharp episode of “The Office” — if that sly sitcom were a live-theater piece blending loony sight gags and spasms of inspired physical comedy with poetic reveries of existential angst.

Performed in a multipurpose space in Washington Hall — outfitted with metal desks, swivel chairs and gooseneck lamps — “Suffering, Inc.” plunks you into the shabby offices of New Life Capital, a low-rent firm that (you assume) has seen better days.

You observe a week in the life of this failing institution, starting with an (overextended) Monday intro to the demoralized employees toiling under their barking, flustered CEO, Alexander (Martin Dinn).