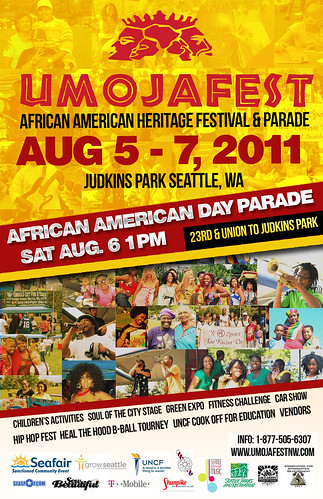 The weekend of Umoja Fest African American Heritage Seafair Celebration will include attractions such as:

Other attractions: a variety of vendors including; food, arts & crafts, community resources.

Described asPrince meets Erykah Badu with a funky bassline and with credits that include work for Coca Cola, Apple, and MTV, the Phoenix,AZ based singer, bassist and songwriter Nik West is anything more than just another pretty face. Challenging and changing the industry around her day by day, West is a special musician with a deep love for music and the chops to back it up. Her debut album “Just In The Nik of Time” released in 2011, showcases Nik West as a vocalist and bassist who creatively delivers her soul and message with modern R&B, jazz overtones, and thought provoking lyrics all while handing you the funk!  www.nikwestbass.com.

As a native o
f Seattle  Ryan, who grew up in a musical family and found his voice at an early age. During high school, his band As1 developed a strong following eventually landing them on the legendary stage at the Apollo Theatre. After a brief hiatus from the stage to graduate from the University of Nebraska and pursue his professional basketball career, RyanChristian has released his first solo album titled “Forever”. Smooth, soulful and refreshing, he describes it as ‘music with purpose’. Focusing on lyrical content, RyanChristian hopes to inspire listeners to embrace the true meaning of love, while also encouraging married couples in their walk together. www.ryanchristianmusic.com

About Shyan Selah & The Republic of Sound

Building on his success as President/CEO of Brave New World (BNW), Shyan Selah has created a style of music that is both unique and commercial. The Republic of Sound provide a progressive fusion of Hip Hop, rock and soul music as a perfect backdrop to Shyan Selah’s hard hitting, gritty yet spiritual lyrics.  “We represent music in its most honest form of expression. Our style is adapting and accepting all musical genres and cultures. So the idea with our approach is to present to the people a collective sound that’s both moving and organic.” – www.shyanselah.com

Other attractions: a variety of vendors including; food, arts & crafts, community resources.

The Seattle 18th Annual UNCF Walk for Education, formally known as the UNCF “Walk-a-Mile to Save-a-Mind”, is back in its first year since 2000.

The walk begins at Judkins Park and will continue through the “African American Legacy Parks”, Langston Hughes Performing Arts Center, and back to Judkins Park.

Come and join us on Saturday, August 6, 2011 at Judkins Park as we walk to help students get to and through college. Corporate teams, fraternities, sororities, groups, churches, organizations and individuals who participate realize that “a mind is a terrible thing to waste”®. UNCF currently supports over 300 UNCF students and scholarship recipients from the Pacific Northwest and Alaska.

Prizes will be awarded to the participants and team captains that raise the most money through confirmed donations through August 31, 2011. Deadline for top team prizes is July 15. Registered walkers who raise $100 will receive an official UNCF Walk for Education t-shirt.

On Saturday, August 6th at Umoja Fest, amateur grill masters will compete in the UNCF BBQ Cook-off for Education to earn the title of “2011 UNCF Cook-off for Education Grill Master” and raise money for education. Up to 60 participants will compete in four BBQ cook off heats that will consist of preparing hamburgers. The top two winners from each heat will compete in one final round heat preparing a “mystery meat”. Each heat will have a panel of judges made up of local prominent community leaders, celebrity chefs, and celebrity athletes/coaches. The participant entry fee will be $50 and each participant will receive a culinary gift bag. All proceeds from this event will benefit the UNCF Pacific Northwest Scholarship Fund.

During the Cook-Off, UNCF will host a Kids Happy Hour, where free turkey dogs and sliders will be available for kids under 18 years of age. Kids will also have the opportunity to receive free backpacks filled with school supplies and information on local educational resources and healthy eating tips.

Join us on Facebook (I Support UNCF – Pacific NW)