Seattle Transit Blog’s Bruce Nourish dug deep into ridership figures to figure out a way to increase reliability along the corridor shared by King County Metro’s 3 and 4 buses. He concludes that moving the route to Yesler between 3rd and 9th Avenues would increase reliability. He also suggests that the southern leg of the 4 (south of 23rd and Jefferson) is redundant and could be cut.

From Seattle Transit Blog (Warning: This post gets super geeky and specific and includes some hard-to-read but info-packed graphs): 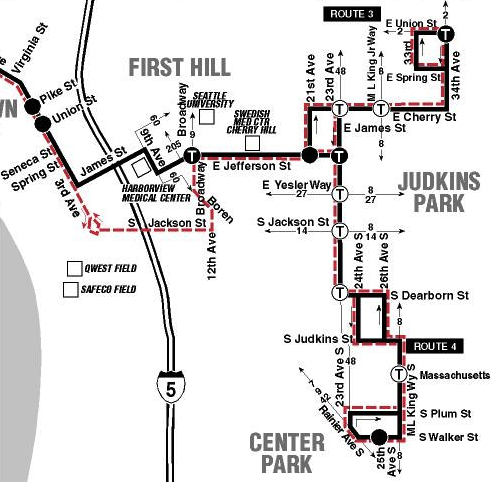 The idea of changing the 3/4 routing from James to Yesler for the I-5 crossing has been tossed around before (CDN wrote about it last year). After just a couple blocks on Yesler, the route would cut back to Jefferson at 9th Ave and continue east into the CD as it does today.

There would need to be some trolley wire changes, which could cost millions. If voters approve the $60 vehicle license fee in November, it’s feasible that some of the $20 million allotted for trolley improvements could go to this project, Nourish notes.

What do you think? Do you use the southern portion of the 4 (between 23rd/Jefferson and MLK/S Walker)? Are areas along this portion served well enough by other routes that they could be cut?