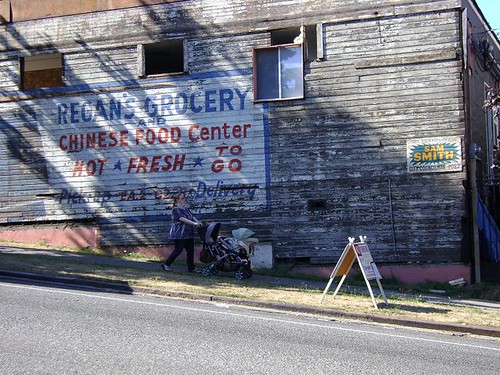 When the facade of the under-renovation building at 18th and Union was peeled back earlier this month (see stories here and here), a stunning historical storefront was revealed. Next to the sign advertizing Regen’s Grocery, however, there was a campaign ad for Sam Smith, who at the time was running for City Council Position 2.

So who was Sam Smith? Longtime residents probably already know the answer to that question. History Link published a brief essay on his life in 1998, around the time the city named Sam Smith Park on the I-90 lid after him:

Sam Smith was the first black person to be elected to the Seattle City Council and the second black State Legislator from King County. He has been credited with helping to bridge the political and cultural gap between the white and black communities.

Sam Smith served in the Legislature for five terms beginning with his election from the 37th district in 1958. One of his first acts in Olympia was to introduce a bill to ban discrimination based on race or religion in the rental or sale of homes. Although the bill failed, he continued to introduce it.

In 1967, he won election to the Seattle City Council and served on it until 1991, when Sherry Harris, another black politician, defeated him. During those years, he also ran unsuccessfully four times for the office of mayor.

0 thoughts on “History uncovered: Who was Sam Smith, candidate of City Council Pos. 2?”