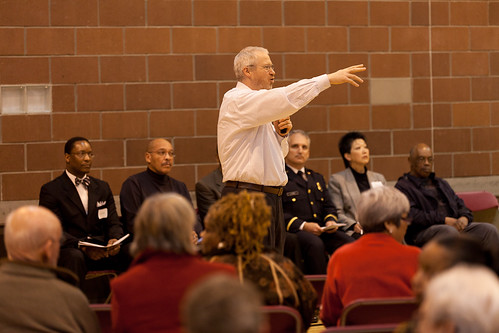 Don’t worry, the mayor didn’t forget about you. Or if he did, he remembers now.

Mayor Mike McGinn recently sent an email to people who attended a Town Hall meeting at Garfield Community Center in March answering some questions he was unable to answer at the time. Among the questions: Can we start a music school in the Horace Mann building? When will SPD start wearing body cameras?

There were some questions raised on the 22nd that we weren’t able to address at the time. I apologize that it’s taken us this long to answer those questions for you, but I wanted to wait until I could give a more complete answer about our body camera pilot, which I’m now able to do. Here are the questions, along with our answers.

1.) Can you change the waste bins in the lobby of City Hall to include composting (along with trash and recycling) and make trash the smallest of the three?

We’ve added compost bins in the lobby and upgraded all of the bins to a newer style, similar to what are already being used in all of the offices in City Hall. There’s no size difference between the three bins, but making it easier to find a compost bin will reduce the amount of waste from visitors to City Hall that ultimately makes it into local landfills.

2.) How can community members stay involved with the Carbon Neutral Initiative?

3.) How will the Families & Education Levy help independent schools?

For more information, contact the Office for Education at 206-233-5118 or [email protected]

4.) When will the City start a pilot program with body-mounted police video cameras?

Pending ongoing labor discussions, the Seattle Police Deparment is currently preparing to move forward with a limited  pilot program involving motorcycle officers, using body cameras on loan from a local vendor. Because of legal issues surrounding unauthorized recording of civilians by police officers through means other than a dashboard camera, participating officers will need to ask for permission before they turn the cameras on.

We’re still evaluating whether a larger-scale implementation would make sense. The outcome of the initial pilot program will answer a lot of questions, but there are also several major challenges we already know about that we’re working to address right now, including getting the state legislature to exempt the use of body cameras from current privacy laws in the same way that dashboard cameras are currently exempt; and civil rights concerns around footage from the cameras being subject to public disclosure.

5.) What can the Mayor do to help keep Creative Activities and Very Special Arts Washington open?

Unfortunately, the program in question was funded by federal money that’s no longer available, and the space where it was housed, the Seattle Center Artists’ Studio in the Center House, is scheduled for demolition in July as part of the Center House renovation project.

While there aren’t currently any organizations in Seattle that provide free studio space for disabled adults, senior centers and community centers do offer some programming. The Gage Academy of Art still offers excellent youth programs and classes, though, and the Seattle Art Museum has excellent teen programs as well.

6.) Will the City support starting a music school in the Horace Mann school building?

Staff from my office have met with Wyking Garrett about UmojaFest and the great work they do in the community, and we’ve also connected them with the leadership from Peoples Family Life Center. The two organizations have had discussions about the music school. We’re supportive of community groups working together to bring new programs and benefits to the community.

Here’s the timeline on the Horace Mann school building. On December 1, 2009 the Seattle School District issued a Request for Proposals to rent all or a portion of 7 empty schools, including Horace Mann. The District received 17 proposals for the various schools, and the proposal from the Peoples Family Life Center was chosen for Horace Mann out of this process. They were issued a lease agreement on March 30, 2010 that lasts from October 1, 2010 to June 15, 2013. The organization plans to use Horace Mann as the site for Work-It-Out, an educational and job training resource pilot program. According to a timeline from the organization, the implementation of the first phase of their program is slated to start in September of 2011.